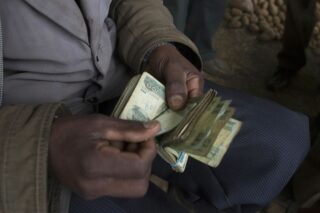 Ethiopia is in a currency devaluation dilemma

It’ll be an understatement to say Ethiopia is going through a rough patch. The reality is that Ethiopia’s economy is in turmoil, and it needs a bailout. But saving it will come at a cost.

Multiple factors have converged to weaken the East African economy since the start of the coronavirus pandemic in early 2020. The pandemic hampered Ethiopia’s exports and significantly reduced remittances. According to a World Bank report, remittances to Sub-Saharan Africa fell by 9% in 2020 and 6% in 2021.

There’s more. Ethiopia’s civil war, which began in November 2020, destroyed vast swaths of factories and industry in the Tigray region, costing Ethiopia roughly $20 million in monthly export revenues. The civil war also caused an internet blackout that cost the country $410 million. Then, the Ukraine conflict disrupted supply chains and food supplies throughout the region, causing rapid price surges for essential goods. And now, Ethiopia’s inflation is at 30%, one of the highest in Africa.

Today, the country faces depreciating volumes in international trade. And that means its current account deficit is widening, foreign exchange reserves are shrinking, and the Ethiopian birr is losing value. This lack of dollars makes it more challenging for the government to service its dollar-denominated debt.

So, in September last year, the National Bank of Ethiopia announced several measures in September last year to improve the bank’s access to dollars. One of them included banning the use of foreign currency in local transactions while reducing the number of days a returning resident can keep foreign cash from ninety to thirty days. The bank also eased restrictions on how much foreign currency people can bring into the country.

But none of these moves has eased fiscal tensions in Ethiopia. And now, there is a growing likelihood that it will need a bailout from the International Monetary Fund (IMF). The country’s economic downturn means that debt is piling up, and it will likely default.

We see proof of this in how Fitch Ratings downgraded Ethiopia to a CCC-credit rating at the start of the year. The agency noted that this “reflects the lack of identified external financing necessary to meet substantial external financing gaps, along with a material decline in Ethiopia’s external liquidity.”

While suggesting that the Tigray peace agreement in November 2022 could improve Ethiopia’s medium-term outlook, Fitch also identified “the significant risk of a default event.” But the problem is, getting a bailout from the IMF might involve a devaluation of the Ethiopian birr.

We saw a similar situation with Egypt when the IMF agreed to a $3 billion support package in December. That bailout included a “permanent shift to a flexible exchange rate regime,” which, since its implementation, has seen the Egyptian pound fall to record lows against the dollar.

The IMF usually asks for a currency devaluation and free-floating exchange rate for different reasons. One of them is that a cheaper currency can attract foreign investors/speculators. A weaker birr would make Ethiopian assets, commodities and exports cheaper, thereby making Ethiopia competitive in the African market.

This method has worked before. In October 2017, Ethiopia devalued its currency by 15%, and that helped grow its export revenue.

But there are obvious downsides to this move. The first one is that imports would become more expensive, leading to higher inflation. For a country with 30% inflation, that’s not an affordable risk. More so, Ethiopia is not in a good place to handle expensive imports now that it is posting large trade deficits.

Also, there is no guarantee that a cheaper birr will bring investors over. Ethiopia will need a wider political reform to install investors’ confidence in its economy. There is no easy option for Ethiopia to choose. But whether or not it already has an endgame, its government will soon need to decide.