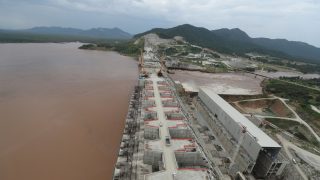 Ethiopia’s Water, Irrigation and Energy Minister Seleshi Bekele has accused Egypt of inciting a recent protest with aims to stop the Grand Ethiopian Renaissance Dam (GERD) project. The protest had ridden on the assassination of Ethiopia’s music icon, Hachalu Hundessa,

Although the Ethiopian government hinted at the use of mercenaries to incite violence, it did not offer any proof of its claims.

So far, about 239 people have been killed making it the deadliest protest since the reign of the reformist Prime Minister, Abiy Ahmed. The protest had coincided with ongoing United Nations-backed talks with the three countries, over the GERD which experts warn could threaten the livelihood of people in the downstream.

The GERD project is a major hydro power project located on the Blue Nile in Ethiopia’s Benishangul-Gumuz region. It was launched in 2011 and is expected to be completed by 2013.

Potential risks of the GERD on downstream countries.

In recent times, disputes have erupted among the 3 countries over the potential food and water crisis it poses on the downstream countries. Egypt and Sudan have made several unsuccessful efforts to get Ethiopia to reach an agreement on how the dam would be filled.

This prompted the Sudanese government to write the United Nations Security Council (UNSC) about the dangers of GERD. UNDC pointed out that this would pose a great threat for millions of people in the region if the country went ahead with plans to fill it up before a deal was signed.

In a statement, Yasser Abbas, Sudan’s Water Resources Minister said it was important Ethiopia shared information about water supplied from the dam, otherwise, the amount of water discharged from the GERD may not be known. He also added that the situation could cause flooding and also put the Roseires dam at risk of being overwhelmed.

Egypt, on the other hand, worries that the GERD could severely cut its Nile water supply, which provides nearly 97 percent of the country’s freshwater needs, depending on how fast the dam is filled up.

Ethiopia, however, maintains that the project is indispensable for its development, and insists downstream countries’ water supply will be unaffected.

The Blue Nile is an important trans-boundary water resource, critical for the livelihoods of people living in Egypt, Ethiopia and Sudan. It contributes about 85 percent of the main Nile volume when it merges with the White Nile in Khartoum.