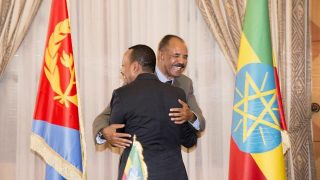 Eritrea’s embassy in Addis Ababa is open for business

Eritrea’s President Isaias Afwerki made an unprecedented visit to Ethiopia on Sunday to put the age-long feud between the two neighbouring countries to rest. The 3-day state visit, which is the first in two decades among many other things, saw to the reopening of the Eritrean embassy in Addis Abba on Monday.

President Afwerki who presided over this milestone ceremony alongside his Ethiopian counterpart, Abiy Ahmed has promised that his country will continue to work towards amity. The president who travelled in the company of other government officials from Eritrea also addressed a large crowd at Millennium Hall in Addis Ababa where a musical concert was held to celebrate his historic visit.

While giving his address, the Eritrean president reiterated that peace has come to stay and history is being made. “We have triumphed over the toxic schemes of past years aimed at sowing the seeds of hate, resentment and destruction. These malignant acts are indeed anathema to our cultures as well as our historical and cohesive interests,” President Isaias Afwerki said.

“We are fully confident that through our joint endeavours, we will recuperate the losses inculcated in the past to achieve robust feats in the period ahead,” he added.

Shortly after the reopening, the Eritrean Minister for Information, Yeman G Meskel, also announced this groundbreaking event on his twitter handle. “President Isaias Afwerki & Prime Minister Abiy Ahmed preside over the ceremony of re-opening of the Eritrean Embassy in Addis Abeba. Yet another milestone in the robust & special ties of peace and friendship both countries are cultivating with earnestness in these momentous times,”  he tweeted.

The embassy which was shut down during the dark days of disagreement between both countries will now be open for business in Ethiopia. Officials have also stated that the Ethiopian airline will resume commercial flights in Asmara, the capital of Eritrea on Wednesday.

As the talk on peaceful coexistence continues to top the list of priorities in both countries, this recent development has been commended by citizens of both countries who are happy to see peace reign in the horn of Africa.

It would be recalled that the two countries ended a conflict which lasted 20 years when both leaders signed a declaration during the historic visit of Ethiopia Prime Minister, Abiy Ahmed to Eritrea earlier this month. This declaration put an end to border dispute and conflict which started in 1998 between the two countries. Also, trades relations will resume while phone connection will also be restored between both countries. It is hoped that this development will help boost economic growth in East Africa.

According to Charles Robertson, chief economist at Renaissance Capital, Ethiopia has a “very odd model for development, but an odd model that has produced very high economic growth.

In an interview with Counting the Cost, he established the fact that the peace deal can help to set things in motion for both economies “…they can rebuild links to Eritrea, create a second export route and perhaps then get a better price when it comes to exporting their goods through the ports. So there is a benefit for longer-term trade,” he said.