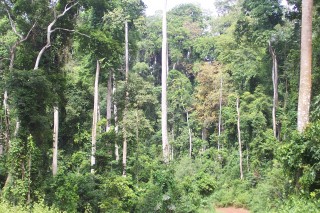 The forestry subsector in Nigeria is a critical source of livelihood for many people – particularly those in the Niger Delta region. Directly sitting on the Gulf of Guinea, the Niger Delta houses Africa’s second largest swamp forest and the Central African mangrove ecoregions, consisting of Africa’s largest mangrove swamps. This forestry subsector contributes significantly to the socio-economic development in the country. With sawmills and furniture shops littered across the moist streets of Niger Delta, it is a significant employer of labour and a principal source of timber, pulp and paper.

But the recent increase in wood logging in the Niger Delta is a cause of concern. Although perpetrators argue that it is their way of contributing to the GDP, wood logging is depleting the country’s natural forest resources. This indiscriminate logging in the rainforest and uncontrolled felling of trees could trigger ecological imbalance and loss of biodiversity. It could also cause desert encroachment, wildlife migration, soil erosion, flooding, and disruption in the hydrological cycle of the water catchment area.

To this end, Azibaola Robert is speaking up against the mindless wood logging and the depletion of natural forest resources for economic gains in the Niger Delta. Azibaola Robert is an environmentalist, legal practitioner and a Fellow with the Nigerian Society of Engineers. Lending his voice, he joins numerous renowned personalities such as Leonardo DiCaprio and Ben Affleck to frown against the destruction of wildlife in the world. After two weeks of delving into the deep forest in the Niger Delta, Azibaola expresses concern and dismay at the high-level encroachment on nature. He condemns how badly the region is decimated.

According to the environmentalist, the daily deforestation and levels of crude oil spillages (by forest explorers) are stressing the forest’s ability to produce oxygen for the communities. He compares the richness of the Niger Delta forest and how it could give humanity oxygen to the Amazon rainforest in Brazil.  “Africans need to take action on climate change issues and link up with the global community so that our inactions will not derail the global efforts,” Azibaola advised.

The rate at which mindless logging destroys forests worldwide can never be overemphasised. When large trees are removed it leaves gaping holes and removes shelter and thermal cover- which further causes degradation of chemical and ecological conditions. These deforestations cause Carbon Dioxide emissions which then contribute to climate change. Health experts have confirmed that deforestation can increase the spread of life-threatening diseases like dengue fever and malaria.

“The Niger Delta rainforest needs protection as other forests across the globe, and it needs to expose the issues and proper education of the local people. And this is the reason I embarked on this once-in-a-lifetime expedition,” Azibaola added.

The environmentalist looks forward to holding an expedition into “the depth of the forest of the Niger Delta, which covers over 400 kilometres of fresh water, continuous tree canopies and swamps while experiencing the rich biodiversity” on an annual basis.