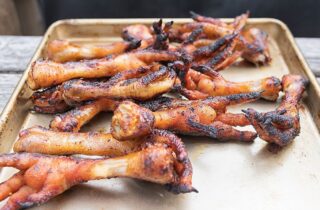 Egypt’s economy has reached a dire state. It has gotten so critical that the government is asking people to eat chicken feet.

Africa’s second-largest economy is facing a record currency crisis and its worst inflation in five years. As a result, food prices have gone so high that many Egyptians can no longer afford chicken, a dietary staple.

Then a controversy started when Egypt’s National Institute of Nutrition released a publication centred on budget-friendly protein-rich food alternatives. The menu included various meals, such as ‘koshari’ and lentil soup. But it was the chicken legs that caught everyone’s attention. Many Egyptians became furious that the government would ask citizens to resort to foods that are symbols of extreme poverty in the country. Traditionally, most Egyptians see chicken feet as animal waste rather than food. For context, chicken makes up 70 per cent of animal protein eaten by Egyptians, according to Tharwat El Zeity, vice-president of the Egyptian Poultry Association (EPA).

Egypt is in an inflation crisis

However, chicken prices are not the primary problem. They reflect a more dominant problem — Egypt’s inflation crisis.

Egypt has been facing financial difficulties for the past ten years. They had to get funding from organizations like the International Monetary Fund and Gulf Arab countries.

But with each new loan, Egypt seems to clog itself deeper into an unsustainable borrowing cycle. The IMF says that Egypt’s debt this year is 85.6% of the size of its economy.

There are several reasons for Egypt’s financial problems. The military plays a significant role in the economy, which makes it hard for private companies to grow. Also, they have spent a lot of money on big projects such as building the tallest tower in Africa and a new capital city in the desert, including a defence ministry bigger than the Pentagon.

In the past two years, the Covid-19 pandemic and the war in Ukraine have made things worse for Egypt’s economy. The pandemic caused investors to pull $20 billion out of Egypt in 2020, and the war caused a similar amount to leave in 2021, per Reuters. For perspective, $20 billion is the equivalent of every penny Egypt has borrowed from the IMF since 2016.

These events have caused a currency crisis in Egypt. The Egyptian pound has lost almost half its value in the past year, and earlier this month, it reached an exchange rate of 32 pounds to the US dollar, which is the lowest in history.

In December, the IMF gave Egypt a $3 billion loan. They hope it will attract another $14 billion from Egypt’s international and regional partners, including Gulf nations with a lot of oil. But it also comes at a cost.

There is still plenty of room for Egypt to recover in the long run. But in the meantime, Egyptians will have to pull through a cost-of-living crisis.