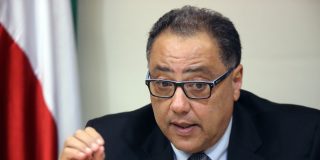 World Bank Group has appointed Dr Hafez Ghanem as its new vice president. He will replace Makthar Diop, the Senegalese economist and banker who previously held the position but will now take charge as the Vice President for Infrastructure. The appointment which was announced through its website took effect on the 1st of July, 2018.

Dr Hafez Ghanem who has served in various capacities will now oversee the affairs of the World Bank in Africa. A development expert who has a stunning career that spans over three decades, he will now spearhead an active regional portfolio consisting of over 600 projects adding up to over US$71Billion.

In a press release which was made available to the public, the World Bank reiterated its commitment to continue initiating projects and provide fresh opportunities in the region.

“Priority will be given to projects and programs that provide economic opportunities for youth and that promote gender equality. The World Bank will also intensify its work in fragile and conflict-affected states,” the statement read.

Dr Ghanem joined the World Bank as a young professional in 1983 where he worked as a research economist, and, since then, has served in various capacities before his recent appointment. In 2007, Dr. Ghanem joined the Food and Agriculture Organization of the United Nations (FAO) as the Assistant Director-General, where he was responsible for the Economic and Social Development Department and FAO’s analytical work on agricultural economics and food security, trade and markets, gender and equity, and statistics before his return to World Bank in 2012.

Before his new appointment as the Vice President for Africa, he held the position of Vice President Middle East and North of the World Bank Group, a position he has held since March 2, 2015. He has previously served as the country manager for five African countries where he worked with many teams of multinationals to produce excellent results.

His sterling career has seen him travel to over thirty countries across Europe, Africa, Central Asia, Middle East and North Africa and Southern Asia. Dr Hafez Ghanem holds a PhD degree from the University of California and is expected to add to his past success and achieve great feats in his new position through his vast experience and virtuosity.