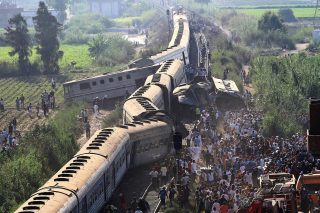 News that 300 Egyptian railway workers, including drivers and technicians, have been suspended after testing positive for drugs should not be a surprise. This move comes on the heels of a February train accident which left 20 dead in Ramses Railway Station, Cairo. In that disaster, the train driver, a reported drug addict, had steered the train into the platform at the station.

Egypt has a nasty history with train accidents. While the state of the rail lines and the decay of train engines have been blamed, there have been many cases where unstable drivers were the sole cause of accidents. When, for instance, in 2017, a deadly train accident in Alexandria left 41 dead and more than 130 injured, blame was heaped on the drivers of the colliding trains, reportedly users of hard substances. So, while the government has taken decisive steps to rehabilitate engines and trains, it recognizes that not much will change if the personnel remain typically destructive.

Official railway sources said the 300 workers would be deprived of “100 percent” of their salary for a month, in addition to a 6-month suspension, at the end of which they will be retested. Of course, the comedy of the measure is that a worker gets up to three chances to transform. According to the same source, if a worker tests positive again in six months, he would continue being suspended. By the third positive test, he will be given a different job outside train operations.

What all of this means is that the Egyptian government accepts it has a drug abuse problem. Last year, Egypt’s Minister of Social Solidarity said drug abuse in Egypt is at twice the global rate, with tramadol accounting for sixty percent of abuse. According to Narconon, Egypt has 6 million addicts, a country where some $2.9 billion is spent on drugs yearly, and it forms the bulk of underground criminal enterprises.

But the government has also tried to tackle the problem sideways. Nader Saad, Cabinet spokesman said drug abusers working for the state could get treatment in specialized centres at the state’s expense, promising that criminal laws will not be applied unless abusers continue. Which seems fair.

Meanwhile, the Egyptian Railway Authority (ERA) says train fares will remain unchanged following fuel subsidies cut, with chairman Ashraf Raslan confirming that ERA will bear the extra cost on behalf of passengers. A silver lining for passengers: tramadol and marijuana-using drivers may break their bones, but ticket prices will never hurt them.