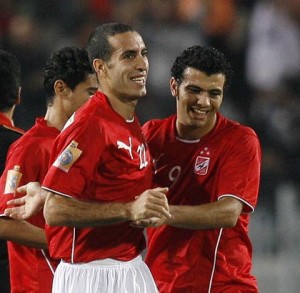 The African continent will witness its own version of the El-Classico in the Confederation of African Football (CAF) Champions League as Egyptian giants Al-Ahly and Zamelek have been placed in the same group.

Draws for the Champions League as well as the Confederations Cup took place at CAF headquarters in Cairo, Egypt on Tuesday.

In group B of the Champions League, Al-Ahly and Zamelek will battle newcomers Berekum Chelsea of Ghana and former winners DR Congo’s TP Mazembe.

Group B is already being labelled group of death as it features three former champions but the games between city rivals Zamelek and Ah-Ahly will certainly draw much attention.

This is because domestic competitions in Egypt has been currently cancelled after about 74 Al-Ahly fans were killed in a stadium riot in February this year.

In the other group, defending champions Esperance of Tunisia are up against compatriots Etoile du Sahel, as well as AS Chief of Algeria and Nigeria’s Sunshine Stars of Akure.

Meanwhile, in the Confederations Cup, reigning champions MAS of Morrocco will face AC Leopards of Congo Brazzaville  in the round of 16 games. Other matches are as follows:

Winners of the two-legged affair will be placed in a two group structure comprising four teams to determine finalists for Africa’s second club competition.