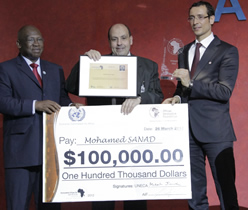 Egypt and Algeria Shine at the first Innovation Prize for Africa

Economic Commission for Africa (ECA) and the African Innovation Foundation (AIF) recently organized the Innovation Prize for Africa to promote the pursuit of science, technology and engineering careers on the continent. As earlier announced, the award ceremony took place in Addis Ababa, Ethiopia this week and had in attendance ministers of finance, central bank governors, government representatives, the media, the private sector and civil society actors.

In the inaugural award that had over 450 entries from 39 African countries, an Egyptian, Mr. Mohammed Sanad who works as a professor at the Faculty of Engineering Cairo University, emerged top winner. He was followed by Mr. Zeinou Abdelyamine, an industrial chemistry graduate from Algeria, who is actively involved in research and development of environmentally friendly insecticides and rodenticides.

Other finalists shortlisted for the awards were:

1. Rui Edgar Conceição Bram, Chief of ICT Department at National Police of Angola. He is currently developing the QINet – Digital Network of Qualification” for use in Africa, Latin America and Asia-Pacific region. The program consists of a global platform with a set of integrated applications that allows the automatic introduction, management and distribution of multilingual educational content in electronic or printed format.

2. Alemayehu Hadis Getahun is an Associate Professor at Jimma University, Ethiopia. He has developed a “Fuel briquette production from coffee husk and pulp – a green and cleaner production approach for coffee waste management.” A carbonizer and an extruder machine were locally designed and fabricated at the Jimma rural technology promotion and research center and used to convert biomasses of coffee waste into fuel briquettes of required dimensions, at a very high rate.

3. Joel Nwakaire, lecturer in the department of Agricultural and Bioresources Engineering University of Nigeria, Nsukka. He has developed an “optimized automated biodiesel continuous production plant”, which can be used for processing various types of vegetable oils. The plant has been tested using non-edible vegetable oil Algae and Jatropha producing good results.

4. Su Kahumbu Stephanou, social entrepreneur and founder of Green Dreams Ltd and Green Dreams Tech Ltd companies based in Kenya. She has developed the iCow application, which is an SMS and voice-based mobile phone application for small-scale farmers in Africa.

5. Evans Muchika Wadongo, founding Chair and Executive Director of Sustainable Development For All-Kenya (S.D.F.A-Kenya). He has developed the ‘Use Solar, Save Lives’ program which involves the design, production and distribution of Solar Powered Lanterns dubbed “Mwanga Bora” to poor rural households without electricity, and he helps communities set up economic ventures from the money initially spent on kerosene.