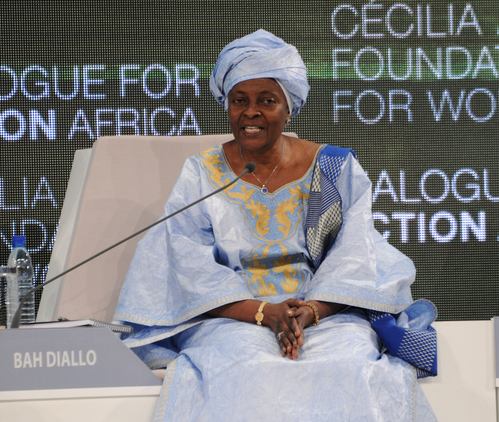 Educate A Woman, Educate A Generation

Someone once wrote, “You educate a man; you educate a man. You educate a woman; you educate a generation” and these words couldn’t be more true in Africa. Globally, it is estimated that seventy five million children do not have access to education, of which fifty million are girls. Of the seventy five million, nearly half of them are in sub-Saharan Africa. If indeed “education is the most powerful weapon which you can use to change the world”, Africa still has a long way to go. However, the continent is not without great proponents of education, especially for the girl child and other disadvantaged groups. Honourable Aicha Bah Diallo, Guinean education specialist and champion for African girls’ and women’s education, is renowned for her work in promoting education in her home country and across Africa.

Ms Bah Diallo, now 71 years old, obtained a Bachelor’s degree in Chemistry from Pennsylvania State University in the United States and a Master’s degree in Biochemistry from Conakry University, Guinea. She eventually moved from the sciences into education when she began her career as a secondary school teacher. She was later appointed principal and worked as a university lecturer. Having received a stellar education herself, Ms. Aicha sought to use her growing profile to provide for others. “Women who have high profiles need to participate in helping others to access quality education. We have to give back what we have received”, she said. Leaving her post as the director of Conakry high school in 1984, she was appointed National Director for External Relations and Projects at the Guinean Ministry of Social Affairs and Women Promotion. She held this post until 1986 when she became the Chief of Cabinet at the Ministry of Planning and International Cooperation (1986-1989). In 1989, Ms. Bah Diallo became Guinea’s Minister of Education, a position she held for seven years.

Speaking about her biggest challenges as Minister of Education, Bah Diallo shares the problem of low enrolment of girls. “When I was a minister in Guinea, there were not many girls in schools… when you want to have girls in schools you have address gender inequality, and then you also have to address the environment where people learn”. By lowering the barriers of access to education for female children, such as poverty, distance from schools and safety of the girls, Bah Diallio successfully increased the enrolment of girls from 113,000 to 233,000 – a number still abysmally low for the country of millions. For Ms. Aicha, there was more work to do.

Working with a strong team of managers, Ms. Bah Diallo set out to transform the education sector. Her administration redeployed nearly a third of the country’s teachers from urban to rural schools as well as from secondary to primary schools and from administrative to teaching positions. She became known as the leader of education reform in Guinea.

In 1996 she joined UNESCO and for nearly ten years, she worked as a senior education leader promoting education for African children. She served as the Director for Basic Education, Deputy Assistant Director-General for Education and as Assistant Director-General for Education in the international organisation. She was also the Africa adviser to the Director-General of UNESCO. A true reformist at heart, Ms. Bah Diallo transformed the working culture of UNESCO’s Education department. She found that the different divisions of the unit were not working together, primary, secondary, technical, vocational, etc., and that the Educational and Cultural units were working in isolation. She asked herself two questions: “How can I get them to work together as a team instead of working on their own? How can they work in education without taking into account the cultural aspects of the community?” Tackling these problems head-on, Ms Bah Diallo succeeded in establishing greater harmony in the organisation and thus better support for governments’ education programmes. Many African countries have experience significant growth in female enrolment and literacy.

Education of the girl child has undoubtedly become a higher priority both for governments and individuals in Africa and a significant portion of the credit goes to the work of Ms Aicha Bah Diallo. She has received many distinctions for her work and today continues to promote the cause that is dearest to her heart. She is the current Chairperson for the Forum for African Women Educationalists (FAWE) and the Network for Education for All in Africa (REPTA). She is a also member of the Mo Ibrahim Foundation Prize Committee for Good Governance and Leadership in Africa.

Education forms the best foundation for the success of entrepreneurs and businesswomen because it not only provides knowledge and discipline but it also safeguards against poverty and disease – the continent’s biggest destroyers of potential. In the words of Aicha Bah Diallo,

“When you have access to education then you will be able to develop your potential… That is why I am fighting for education for all – through life, from womb to tomb.”