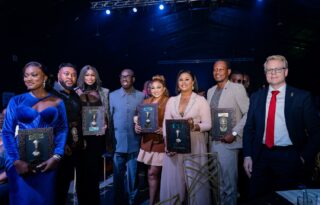 The Edo State International Film festival, facilitated by His Excellency Governor, Godwin Obaseki and Managing Director, Edo State Skills Development Agency (EDOJOBS) Mrs Ukinebo Dare, in partnership with the Swiss Agency for Development Corporation and the German Government (BMZ) through the Deutsche Gesellschaft für Internationale Zusammenarbeit (GIZ) SKYE Programme brought together movie makers, investors, distributors and industry enthusiasts from around the world. The festival served as an avenue to promote creative skills development and create job opportunities for the residents of Edo State.

Hosted by actors, Rex Nosa and Linda Osifo, the closing/award ceremony marked the finale of the successful 4-Day festival with a colourful night filled with dance, spoken word, and standup comedy performances from local talents.

Opening the event with her remarks, Ukinebo Dare, Convener and Co-Chairman of the Edo State international film festival 2022 appreciated the partners and guests for “a fantastic event, including the veterans and filmmakers who shared their talent and creativity with us. We would like to invite filmmakers, and producers to employ the services of the Victor Uwaifo Creative Hub. We have world-class equipment that you need here to help you produce the best quality films,” she stated.

Film entries were assessed by the official Jury panel, with winners from 15 categories emerging. $10,000, $5,000 & $5,000 was awarded by the Chief Host and Governor of Edo State, H.E Godwin Obaseki, for ‘Best Feature Film (overall)’, ‘Best Film shot in Edo’ and ‘Best Indigenous Film’ respectively. “In Edo State, we have the most creative people in the world, and our history reflects this. We are also the most creative Africans on the continent. The talents we are celebrating tonight have emerged from a long and strong heritage of creativity. This award is to show appreciation for their work and how they choose to tell our stories”, said the Governor while presenting the award for Best Feature Film (overall).

Three other categories were also awarded a cash prize of $2,000 each by Phoniex, for ‘Best Use of Technology Film’, ‘Best Cellphone Film’ and ‘Best Student Film’.

The Award ceremony honoured and celebrated Edo State’s indigenes who have shaped and are still shaping the creative industry with a special award segment titled ‘HeartBeat of our Time’.

While presenting a special award to participants and winners of ‘The Rural Photography Training’ commissioned in the rural areas by GIZ Skills Development for Youth Employment (SKYE) Programme and EdoJobs, the Head of Programme, Tobias Wolfgarten said, ‘Our partnership with Edo Jobs and ESIFF has been rewarding. I’m therefore delighted to present these awards to four winners from the photography competition. Beyond this, GIZ Skye will also be offering entrepreneurship training to the winners whilst also exhibiting their works to help raise funding which will go directly to the winners”.  The rural photography training in rural areas featured 24 entries and 4 winners were rewarded with N50,000, N75,000, N100,000, and N150,000 respectively. In addition, GIZ SKYE launched an eLearning platform called Edo State Academy to help young citizens of the state scale up with soft skills training.

Following the success of the maiden edition, the host and convener are scheduled to announce a date for the next ESIFF in the coming weeks.

The full list of nominees and winners is below: