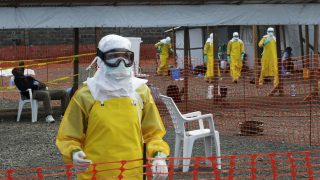 Ebola is no longer an incurable disease

On Monday, August 12, 2019, scientists announced that Ebola can no longer be referred to as an incurable disease after two of four experimental drugs being tested in the Democratic Republic of Congo (DRC) showed survival rates of as much as 90 percent.

Moving forward, the two experimental drugs, both antibodies that block the virus, will be the only drugs offered to future Ebola patients and all Ebola-infected patients in the DRC. One is REGN-EB3 – developed by Regeneron Pharmaceuticals, and the second is mAb114 – developed by Ridgeback Biotherapeutics.

The WHO and the US National Institute of Allergy and Infectious Diseases (NIAID), co-sponsors of the trial, said early results of the drug trial showed clearly better results which is very good news. This puts an end to the trial which started in the DRC last November and a stop to the use of ZMapp and Remdesivir, the two other trial drugs.

“From now on, we will no longer say that Ebola is incurable,” said Prof Jean-Jacques Muyembe, director-general of the Institut National de Recherche Biomédicale in DRC, who co-led the trial. “These advances will help save thousands of lives.”

According to Dr. Anthony Fauci, the director of the US NIAID, 49 percent of the patients on ZMapp and 53 percent of those on Remdesivir died during the trial. In comparison, REGN-EB3 had the lowest overall death rate, at 29 percent, and mAb114 had a mortality rate of 34 percent.

But the results were even more impressive for people who sought early treatment before the spread of the virus in their bloodstream – 94 percent of those who got REGN-EB3 survived and 89 percent of those on mAb114 survived in comparison with a two-third survival rate of the patients who got Remdesivir and almost three-quarter of those on ZMapp.

Health officials are hopeful that this news will encourage more people to seek care as soon as symptoms of Ebola appear. Dr Michael Ryan of the WHO’s emergencies program said on average, people who fall ill do not seek medical care for four days, thereby reducing their chances of survival.

This has negatively impacted family members and communities further deterring them from seeking swift medical care. But with the current survival rate at over 90 percent, it is easier to build trust among the population and people will be encouraged to turn up at treatment centres on time.