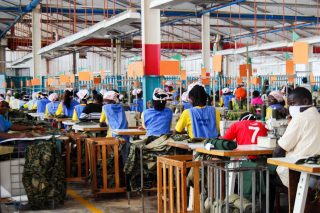 In a move to promote the patronage of locally made textiles, the East African Community (EAC) has introduced policies for the establishment of special fashion days and weeks in the region.

Meanwhile, the first week of September in every year has been earmarked for the Afrika Mashariki Fashion Week – a trade fair and exhibition of locally designed textiles and garments.

As explained by a senior Public Relations Officer at the EAC Secretariat, Simon Peter Owaka, the declarations are part of strategies adopted by the region to spur demand for locally made textiles and garments and to build brand identity.

“The declarations would enhance local consumption of East Africa-made products and enhance our productive capacity in the textile sector,” Owaka told Anadolu Agency. “Imagine a foreigner moving in EAC countries on a particular Friday and finding people donning similar attire – a strong message of an intact community.”

Owaka also pointed out that if a combined population of nearly 190 million people bought local attire for Friday, many jobs will be created, incomes improved and the East African people will no longer have to depend on used clothes. The initiative would also serve as motivation to local and foreign companies to invest in local textile production.

However, the initiative has been greeted with mixed reactions. While some residents welcome the idea of wearing of new locally made attires, others claim that their prices are much higher (compared to imported used clothes), which discourage buyers.

The latest declarations will be implemented in all EAC member states – Rwanda, Uganda, Kenya, Tanzania, Burundi, and South Sudan. And the annual fashion week will be hosted in all member states on a rotational basis each year.

EAC member states in 2017 agreed to grant garments and textiles manufacturers a three-year waiver of duties and value-added tax (VAT) on inputs, fabrics, and accessories not accessible in the region.

Also, the bloc also adopted a three-year strategy to phase out importation of used clothes and shoes. Levies were imposed on the products from 2017 to 2019. This was aimed at boosting local production and reducing the cost of production.

In February, the bloc reaffirmed plans to develop a strong textile and leather sector in the region. Member states as well are determined to offer citizens competitive options in regional textiles and footwear.

Tanzania’s Deputy Minister of Agriculture, Mary Mwanjelwa, earlier this year disclosed plans to boost the country’s cotton exports to $150 million by 2020, up from the current $30 million.

Last month, Uganda unveiled a strategy for the cotton, textiles and apparel sector with the aim of increasing fibre cotton production, scaling up domestic value addition and creating employment. The scheme supports its third edition of the National Development Plan (NDPIII).

The collective policies and efforts by the EAC governments are based on the potential of the textile sector. A recent study by the EAC Secretariat on cotton, textile and apparel value chains revealed that the sector could become a major player in the regional industry.

The report says regional textile will have a potential trade valued at $3 billion by 2025. However, rising importation of used clothes hampers the development potential in the local industry.