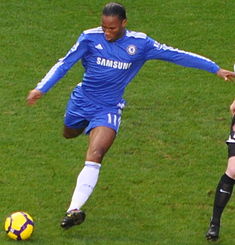 Drogba Hits Back At “Too Old” Critics

Ivory Coast and Chelsea of England striker, Didier Drogba, has hit back at critics who have labeled him too old for the London outfit.
The Chelsea forward scored a first-half stoppage time goal to give the Blues a 1 : 0 lead against defending champions Barcelona in the UEFA Champions League first leg semi-final game at Stamford Bridge.

The 34-year old has endured a not-so-spectacular season at Stamford Bridge–compared to his high standard– with many pundits suggesting he was past his prime.

But after Wednesday’s dogged performance, Drogba has a word for his critics: “For those who say I was too old, they saw that maybe I could run one, two or three more years.”

And speaking about his team’s performance against what is widely regarded as the best team in the world at the moment, the Ivorian admits his Chelsea were a bit fortunate.

“That’s football and I think we were a bit lucky,” he said. “You have to work for luck to come and to happen. We worked a lot. We worked hard.”

With the decisive second leg coming up at Camp Nou next week Tuesday, the Blues talisman believes his team can prove doubters wrong and qualify for what would be their second ever Champions League final and says Chelsea “have to go there and try to score another goal.”

However, before that game, Drogba and his Chelsea side come up against Arsenal featuring Africans Alex Song, Gervinho and Marounne Chamakh in a fierce battle for next year’s Champions League place.