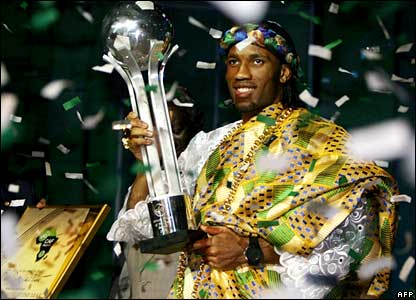 The mood around Stamford Bridge was tense. I could feel the pulse even from the 14inch Samsung television in my living room. The Blues were in a race for top four spot. Not qualifying for the UEFA Champions League next season would be disastrous. But Stoke City, their opponents on this fateful day, were not in the mood to be rolled over despite being a man down. Cue the 68th minute: up stepped Didier Drogba. Receiving a delightful pass from Juan Mata, Didier took the ball with his left, rounded the on-rushing keeper Thomas Sorenson and poked the ball into the unguarded net. Gooooooaaaal! Fists puffing in the air! The Brigde faithfuls were delirious! Sheer delight!

In appreciation, Drogba dedicated his solitary strike and historic 100th premier league goal to the Chelsea fans. “All these goals are for the fans, for the club and I am happy now, ” the delighted Ivorian told Reuters. “To share this moment with the club I really love, I am really happy. It was a nice goal for 100.”

It was quite easy to see Drogba’s excitement in those few words. The goal was his 100th league goal; he became the first African to reach the milestone (Nigeria’s Yakubu Aiyegbeni is on 99); he is now the fourth all time highest goal scorer in Chelsea’s history. And to achieve all these a day to your 34th birthday is just, eh, eh,…..still searching for the right word……SENSATIONAL!

It wasn’t always a smooth ride for Didier. Born in Abidjan, the Ivory Coast capital on the 11th of March 1978, Drogba had to shuttle between living with his uncle in France and his parents back home. But ultimately, his parents moved to France after loosing their jobs. Drogba joined them and had to combine going to school and playing semi-professional football with clubs around his neighbourhood.

After school, he joined French division 2 (Ligue 2) side Le Mans. However, he contended with lots of injuries, which hampered his development. In between, Drogba met his wife- a Malian, and soon they had their first child. As Drogba himself notes, “Isaac’s birth was the turning point in my life, it straightened me out.”

Didier became a different being after that. His on-field performances soon attracted other clubs. And half way through the 2001/2002 season, the striker joined Guingamp for £80,000. In his first full season, Didier scored an astonishing 17 goals in 34 games in Ligue 1. Coincidentally, Drogba singled out his present Chelsea teammate, Florent Malouda, for praise for his contributions to most of the goals.

Well, the saying that you don’t keep a good man down was so true for Drogba as he left Guingamp at the end of the season to join Marseille in 2003. Drogba’s rise to stardom went a step further with Marseille. He bagged 19 league goals, 6 Champions League goals and 5 more in the UEFA Cup helped the French club reach the final, loosing 2 : 0 to Valencia but earning Drogba a legendary status at the Stade Velodrome.

The summer of 2004 saw Drogba make a record £24 million pound move to join The Roman Abrahmovic revolution in Chelsea. 8 years on, Didier has won the Premier League thrice, 3 FA Cup as  well as 2 Carling Cup medals. He’s been top scorer in the league twice and is also the only player to score in 6-cup finals in England.

Nonetheless, the Ivorian captain has not gone without controversies. At the early stage of his Chelsea career, Drogba was accused of always diving. In fact, former Liverpool boss Rafa Benitez was so enraged; he reportedly said he had a 4-year compilation of Drogba’s diving antics. Drogba also had a well-documented squabble with Manchester United captain Nemanja Vidic culminating in his getting sent off in the 2008 Champions League final for slapping the Serbian. In 2009, he also received a 6-match ban from UEFA after confronting referee Tom Henning Ovrebo in that controversial semi-final Champions League game against Barcelona. Drogba was caught shouting “its a f**king disgrace” into one of the TV cameras.

These little misdemeanours however do not take anything away the fact that Drogba is an African icon. In 2006, the Ivorian helped bring about a ceasefire in his country for the first time in 5 years. He pleaded and succeeded in getting the warrïng factions to lay down their arms and support the national team who had just qualified for the FIFA World Cup for the first time. He also helped move an African Nations Cup qualifier to Bouake (Ivory Coast’s second largest city), a move that helped the peace process. This earned him recognition by Time Magazine in 2010 as one of the world’s 100 most influential people.

Also, since 2007 he’s been a UN Goodwill Ambassador and is presently constructing a hospital worth £3 Million pounds in the Ivorian capital Abidjan through his Didier Drogba foundation. He has also be named Africa’s best player on two occasions: in 2006 and 2009.

Truth be told, I never imagined writing a tribute for Didier some 6 years ago. Not after he constantly gave Arsenal, the team I support heartbreak year in year out. But, over the years, that “hatred” has evolved into adoration and respect so much that I was distraught when he missed a decisive penalty in the finals of the African Cup of Nations recently. That in a nutshell tells the whole story: Drogba is a true AFRICAN ICON! Happy Birthday Didier!