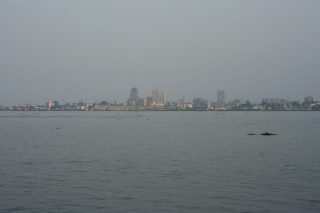 DRC, RC agree to link their capital cities with a bridge worth 550 million USD

The Democratic Republic of Congo (DRC) and neighbouring Republic of Congo (RC) have signed an agreement to build a bridge across the river that separates their capital city Kinshasa and Brazzaville. This took place on the sidelines of the Africa Development Bank Investment Forum in South Africa

The project which is estimated to cost around 550 million USD will be developed as a public-private partnership, and the main developer Africa50 would lead the project development providing strategic partners and equity for the construction. According to a statement released during the forum, the project will include a railway track, toll bridge, and road/sidewalk.

The new infrastructure will no doubt enable the two nations to develop special economic zones in both countries opening both capitals to endless trade opportunities and improved development.

“The positive socio-economic impacts from this project will be significant, stimulating trade and economic growth and creating jobs in the Republic of Congo and beyond.”

The project which is part of the Programme for Infrastructure Development in Africa (PIDA) according to a statement will include a toll bridge, railway track, road and sidewalk. The bridge would not only improve the transport network between Kinshasa and Brazzaville but also provide another alternative to accessing these capitals currently linked by water and air.

However, both DRC and RC government have been working on this project for a long time since as far back as 2007 when initial protocols were signed while cooperating and co-funding feasibility study with the African Development Bank (ADB). Akinwumi Adesina, President of the African Development Bank, Akinwumi Adesina explained that this idea to the capital cities dates back to the mid-19th century. “This project is just the beginning, more will follow,” said Adesina.

Kinshasa and Brazzaville are separated by the Congo River, and travel between the two cities is currently only possible by boat or plane.