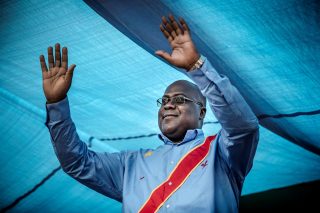 DRC gets Africa’s biggest hydropower project back on track

The Democratic Republic of Congo is looking to breathe new life into the Grand Inga Dam project, which is said to be the world’s largest proposed hydroelectric scheme that could produce sufficient energy to power east, central and southern African countries.

The project on the Congo River could have up to eight separate dams that would produce 43,500MW (4.35GW) of electricity – more than twice the power generation of Three Gorges Dam in China, and over a third of the total electricity currently produced in Africa.

But since mooted ten years ago, it has faced delay over several issues such as contractors, timelines and funding sources for the $80 billion needed to finance the construction of the dams and the establishment of transmission lines.

That will be the focus of discussions when leaders from concerned regions meet in a conference next month, which is organized by President Félix Tshisekedi of the DRC and is expected to be attended by delegates from Angola, Kenya, Republic of Congo, Rwanda, South Africa, and Uganda. The April 28 meeting in Kinshasa is backed by the African Union while Egyptian head Abdel Fattah al-Sisi and potential investors have been invited to help kick off the project.

In addition to discussing the feasibility of the Inga Dam project, officials say the move by Tshisekedi is meant to garner regional political support for the mega power project that is seen as the ultimate solution for Africa’s power shortage and green energy.

DRC hosts the largest concentration of hydropower potential in the world at the Inga Falls, about 150 km from the mouth of the Congo River. With this, the country could provide a significant portion – up to 40 percent – of Africa’s electricity demand but harnessing that potential has not been particularly easy.

The country presently has two Inga projects that were completed in the 1970s and 1980s respectively. And in late 2018, authorities announced a deal for a Spanish-Chinese consortium to develop the Inga 3 project on the Congo River rapids, which is one of the world’s most powerful and centre to the country’s energy plans.

But the joint venture idea was resisted last year. Spanish firm ACS withdrew from the possible consortium that included China’s Three Gorges Corp and could have seen $14 billion invested in the third dam with funding from the African Development Bank.

“There has been an Inga 3 development agreement for a few years now. But we can go from Inga 1 to Inga 8,” DRC Minister of Water Resources and Energy, Eustache Muhanzi Mubembe, said.

General Electric has been contracted to renovate the neglected Inga 1 and 2 dams and will be working on Inga 3 after signing an agreement worth $1 billion – the largest U.S. investment in Congo. But the deal with the American firm does not prevent other partners from being part of the project, according to Mubembe.

AfDB will be funding the redesign of the Inga 3 dam, Tshisekedi said in a recent State of the Nation address. That would raise the output from the initial 4,800 megawatts to reach 11,000 megawatts or more, and Inga could make DRC “the heart of the world’s clean energy production system,” the President added.

With AfDB’s permission, the DRC is now inviting bidders while officials are in talks with the regional bank for an agreed date to commence construction. Confirmation is expected in the next few days, Mubembe said.

A major and recurrent barrier to implementing the hydropower project after many years of conception was the political instability in the DRC. With relative stability now in the country after President Tshisekedi came into power last year, the DRC is moving fast to revive the mega-project that could also help save its endangered forest resources.