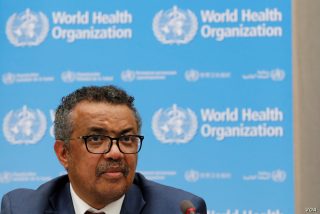 DRC Ebola outbreak has been declared an international emergency

The Director-General of the World Health Organisation (WHO), Dr. Tedros Adhanom Ghebreyesus, on Wednesday declared the Ebola virus outbreak in the Democratic Republic of the Congo (DRC) an international health emergency.

Since the virus broke out 11 months ago, the epidemic has been unflagging with over 1600 deaths recorded. This is despite a highly effective vaccine and swift international response. A massive awareness and vaccination campaign, with almost 75 million screenings, has kept the highly contagious virus almost entirely confined to two provinces in northeastern DRC.

However, a pastor died this month after traveling to Goma, a city of almost two million people on the border with Rwanda, and the gateway to the rest of DRC and the world. While on Wednesday, the WHO reported that a fisherwoman had died in Congo after four vomiting incidents at a market in Uganda, where 590 people may be sought for vaccination.

Threatening to spread to a major city (Goma) and into neighboring countries, the Public Health Emergency of International Concern (PHEIC) designation, a rarely used global alarm, was declared on the Ebola virus outbreak.

“It is time for the world to take notice and redouble our efforts. We need to work together in solidarity with the DRC to end this outbreak and build a better health system,” Dr. Tedros said. The declaration followed a meeting of the International Health Regulations Emergency Committee for Ebola virus in the DRC.

Prior to this development, the WHO emergency committee had declined to declare an emergency on the outbreak on three occasions. Consequently, it faced intense pressure from many experts who felt the scale and risks of the epidermic meant it had to be given the emergency status.

In making the declaration – only the fifth of such since the WHO introduced such designations in 2005 – the Committee cited recent developments in the outbreak including the first confirmed case in Goma. Also, the WHO Emergency Committee’s chairman, Professor Robert Steffen, allayed the outbreak’s designation as an emergency by saying it remained a regional, rather than a global threat.

Moreover, Steffen stressed that no country should react to Ebola by closing borders or restricting trade, as it is essential to avoid the punitive economic consequences of travel and trade restrictions on affected communities.

“It is important that the world follows these recommendations. It is also crucial that states do not use the PHEIC as an excuse to impose trade or travel restrictions, which would have a negative impact on the response and on the lives and livelihoods of people in the region,” Steffen added.

Meanwhile, WHO has warned that the nearby countries of Rwanda, South Sudan, Burundi and Uganda are the most at risk, while Central African Republic, Angola, Tanzania, Republic of Congo and Zambia are in a second tier.

In recommending a PHEIC, the committee made specific recommendations related to this outbreak. “This is about mothers, fathers, and children – too often entire families are stricken. At the heart of this are communities and individual tragedies,” Dr. Tedros said. “The PHEIC should not be used to stigmatize or penalize the very people who are most in need of our help.”