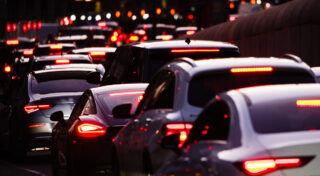 Does Lagos need a thousand more cars to serve its teeming population?

Last week, a roadshow of 1000 GAC blue and white SUVs and saloon cars was held on the Lagos 3rd Mainland bridge. According to the state government, it marked the launch of the new LagRide initiative, one meant to “ensure a seamless transportation system for the teeming commuting populace in the state.” The intent is great, but does Lagos need a thousand more cars to serve its growing population?

LagosRide is a new e-hailing taxi scheme initially unveiled by governor Jide Sanwo-Olu in 2021 to redefine road transportation in the state. The new 1000 units of automobiles are the pilot fleet of the scheme. The provision of these units is in partnership with CIG Motors Company Limited. The venture agreement hopes to see the automobile company establish an assembling plant in the state.

As seen on the ride-hailing website, LagRide allows users to book and share the cost of a ride with similar transit patterns, not more than a kilometre apart, and a pick-up time not more than five minutes apart. The platform links users based on their preferred pick up and drop off locations. Like other popular ride-hailing services, LagRide enables users to share their live route ETA with friends. Other features include AI-enabled dashcams and panic/SOS buttons onboard for security.

However, as great as the intent is, it misses the mark in addressing the core issues of transportation that Lagosians face. It presents Lagos as merely a revenue-generating state with little concern for the well-being of its residents.

Lagos is the smallest state in Nigeria, yet, it has the highest urban population, and it is the economic hub of the most populous black nation on earth – Nigeria. Home to about 24 million people, Lagos is better defined as a city of dreams. As far back as 2016, 123,840 migrants enter the city daily, the highest in any city in the world. Consequently, Lagos is a city bursting at its seams. With limited geographical space and a burgeoning population, movement in the state is arduous.

The Third Mainland Bridge, where the promotional video for LagRide was shot, is infamous for its traffic gridlock due to the number of commuters that ply the route daily – an average of six million commuters. Statewide, Lagos may be losing as much as N4 trillion annually and 14.2m hours daily to traffic congestion. It is only apt for the decongestion of roads to be prioritized by the government. Instead of having a thousand cars carry 1000-1500 people, 42 – 50 Bus Rapid Transit (BRT) would have sufficed.

However, the existing modes of mass transportation in Lagos state are road-based. As a result, existing and alternative modes of transportation, such as LagFerry, should be used more frequently. There was a proposed Cable Car project that never saw the light of day. The proposed cable car is expected to have a daily capacity of 240,000 trips and could reduce average journey times by up to 70 minutes. This would almost certainly affect the transportation sector. Fewer cars on the road equal less congestion and the associated higher costs and inconvenience.

Residents are expected to benefit from the ride-hailing taxi scheme in terms of jobs and economic opportunities. LagRide also aims to eliminate all rickety cars used as taxis by allowing operators to become vehicle owners through the “lease to own scheme.” Governor Sanwoolu revealed that the Cooperative Society in the Lagos Ministry of Wealth Creation would give drivers the room to pay monthly instalments spread across four years to retain the cars.

But a look at the drivers’ requirements suggests it will be difficult for average Nigerians to benefit from the initiative. Interested drivers will get cars only after a 20 percent (N1,845,500 million) down payment. Afterwards, the balance payment will be deducted from daily earnings for a maximum of four years.

The purchasing power of Nigerians is low, hence used cars (Tokunbo) are often the cost-effective options to brand new vehicles. People have argued that it is better to acquire a foreign used car with the down payment of N1,845,500 and work with a private regulated ride-hailing company like Uber and Bolt.

Furthermore, a mandatory fee of N8,709 will be deducted from drivers’ wallets daily to service their debt obligation, plus a service fee of 25 percent. Some private mobility companies charge the same and even less. For example, Bolt charges 20 percent commission on every trip while Uber charges 25 percent. One would expect a lesser percentage of commission from the government.

The daily delivery fee of N8,709 is over 3 million annually and over 12 million for four years. The down payment of N1,845,500 (20 percent equity of the cost of the vehicle) puts the vehicle price is at nine million naira. By the end of four years, the driver would have parted with a whopping additional cost of N3 million. Also, daily remittance is compulsory for drivers to meet the four years target. This means no rest or off days for the drivers.

Still, meeting the target may be difficult, especially in the first few years. Since LagRide is new, it has to compete with existing e-hailing companies like Uber, Bolt, Shuttlers, Treepz, etc. Even the performance of previous government-backed mobility companies, such as Ekocab, demonstrates that general acceptance is shaky. The state government said the 1000 GAC vehicle is the first phase of the LagRide initiative, implying there’s more to come

The government is advised to redirect the resources budgeted for the expansion of the initiative into an alternative and sustainable means of transportation in the state. And if the whole motive is to make Lagos an appealing and perfect spot for the GAC auto assembling plant, the government should adopt it as its official vehicle. But then, why not patronize indigenous manufacturers like Innoson and Jet motor companies to boost local manufacturing. That, to a reasonable extent, would reduce our over-reliance on importation.