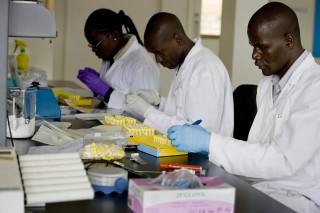 Does Africa need another ‘Einstein’ or more resources to nurture the brilliant minds it already has?

The Next Einstein Forum, which is reputed to be the largest scientific gathering in Africa, held in Dakar, Senegal, between the 8th and 10th of March, 2016. The Rwandan President, Paul Kagame, and Macky Sall, the President of Senegal, gathered with about 700 African mathematicians and scientists to discuss how to explore hidden potential for innovation and research in Africa.

With the unveiling of the NEF fellows, comprising of 15 young African scientists and technologists who have made incredible differences with their various research work, it is obvious that Africa is indeed full of brilliant minds with the capacity to change the continent as well as the world for the better. However, the scientists complained that African scientists still do not get the level of recognition they deserve. In an interview with DW, the NEF chairman, Thierry Zomahoun, mentioned that “there were more African engineers in the United States than in the whole of Africa.” He also pointed out that Africa contributes only 1 percent to world research, saying “we need to reverse that trend.”

Furthermore, Zomahoun shared the story of a Cameroonian scientist who solved a 70-year old problem in immunology, but is still being stopped from acquiring global fame. “You know there’s a guy here that everyone should be running after who has solved a 70-year problem in immunology. 70-year old problem that will help improve vaccines!” he said. The Cameroonian scientist, Wilfred Ndifon, is using a mathematical approach to develop a flu vaccine. He also believes his method could also be used to design vaccines for other viral diseases such as Yellow Fever, Dengue and even Zika.

Every so often, the news of a young African who has invented a car, a plane or created an app that will solve people’s problems, floats into global attention, but, there’s still a certain amount of uncertainty when it comes to pursuing their career paths in the various scientific or technological fields, due to the number of limitations in Africa. Rather than face these uncertainties, most of these young scientists prefer to move abroad where more opportunities abound with better opportunities for remuneration.

What can Africa do to retain and grow its many talents?

Africa needs to invest in its educational system, particularly for higher institutions. If world class universities that pay attention to research and scientific solutions exist in Africa, young African scientist may not feel the need to travel abroad in order hone their skills or compete favourably. John Silvanus Wilson Junior, president of Morehouse College in the United States, hinted that Africa is still lagging behind in its institutional setup.

The lack of employment opportunities is one of the key propellers of talent migration from the continent. With over 70 percent unemployed young people in Africa, it is obvious that we still have a long way to go in job creation.

Mail and Guardian asked to Neil Turok (one of Africa’s leading scientists), whether he believed that Africa currently has enough jobs and industry to employ these young scientists, to which he replied “No, we have to create opportunities at the same time as graduating [the scientists]. We have to create the whole scientific infrastructure in Africa.”

One of the things that can be done for scientists is to teach them entrepreneurial skills, so that they can effect global change and earn a good living while doing it.