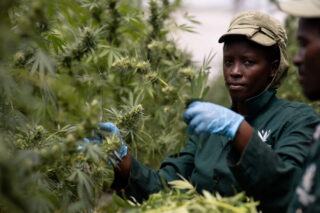 Africa is getting its first listing of a medical cannabis-focused SPAC (Special Purpose Acquisition Company) as Cilo Cybin Holdings has gotten the go-ahead to list on the Johannesburg Stock Exchange (JSE). In an initial public offering (IPO) that will be open until November, the company hopes to raise R2 billion ($115 million) for the production of medicinal cannabis.

A report by Allied Market Research says the global cannabis market generated $25.7 billion in 2021 and projects it to reach $148.9 billion by 2031. Meanwhile, a report by Prohibition Partners says Africa’s legal marijuana industry could be worth as much as $7.1 billion by 2023. This projection focused on the legal and regulated cannabis markets in South Africa, Zimbabwe, Lesotho, Nigeria, Morocco, Malawi, Ghana, eSwatini, and Zambia.

SPACs are companies formed solely to raise capital through IPOs or to acquire or merge with other companies. That means these companies don’t have commercial operations. Cilo Cybin’s listing makes it the fourth SPAC in Africa and the first cannabis-focused SPAC. Will this be the first of many? How likely to open up is Africa’s cannabis market? Let’s dig in a bit.

Africa has been a leader in global cannabis production for several decades. However, most of its production is illegal. The United Nations estimates that over 38,000 tonnes of cannabis are produced illegally across Africa annually.

In 2017, Lesotho became the first nation to legalise cannabis on the continent. Since then, nine other countries have passed laws to legalise its production for medical and scientific purposes. These include Zimbabwe, South Africa, Uganda, Malawi, Zambia, Ghana, Eswatini, Rwanda and Morocco.

A cash crunch has been happening across Africa, fueled by the 2020 pandemic, declining oil revenues and other factors. As a result, countries are becoming more open-minded to the once-forbidden plant.

The agricultural sector, which employs the most Africans, can get a massive boost from cannabis as they stand to earn more from the plant. A study found that small-scale farmers in Tanzania made $200 per acre with cannabis, compared to only $20 to $30 per acre from maize, sugarcane, and other food crops. Also, in Congo, a 100-kilogramme sack of cannabis fetched between $96 and $128, more than two times the $54 price per sack of maize.

How ready are we for a cannabis market boom?

Africa’s cannabis market has made progress, albeit slow. Cannabis use is still illegal in most African countries. But even in the most conservative ones, debates are springing up, ultimately aimed at spurring cannabis policy reforms.

One of Africa’s dominant problems with cannabis-focused policies is that they often favour corporate businesses over smallholder farmers. So even though there’s plenty of prospect for the latter to profit from a market boom, it’s still unlikely.

Besides, policies are only liberal towards medical and scientific use of cannabis. So cannabis production, trade, and consumption for non-medical purposes are still illegal. That makes markets like Nigeria, where 10 per cent of the population consumes marijuana for pleasure, less compelling since the rising demand is for non-medical use.

So there is still a lot of hard ground to break before Africa’s cannabis market enters a boom phase. But most of the work lies with the policymakers.

Are SPACs the answer?

Cilo Cybin’s SPAC listing is encouraging news for medicinal growers and exporters in South Africa. However, the scope of its impact is still unclear. There’s the obvious promise of job creation, seeing that Cilo Cybin’s acquisition target is a facility in Pretoria that can produce about R150 million worth of cannabis and vaping products a month. But whether it would disrupt the industry, particularly beyond South Africa, is still unknown.
There’s already competition, as many others have received licenses to cultivate or manufacture cannabis products. But since this listing is the first of its kind in Africa, the stakes are higher. What we’re sure of is that everyone with interest in the cannabis industry will be watching to see where this method leads. If it successfully raises its target funding, we’d likely see more interest in SPACs.