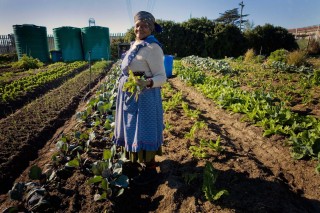 “My name is Omoruyi. I am a farmer in Edo State. Two years ago I applied for the NIRSAL agric business loan to expand my farming business and help put food on the tables of people in the Ipoba Hill community where I live because I need more workers. But things did not go as I had planned.”

Omoruyi is a graduate of Agric economics from the prestigious University of Benin. Being a chip off the old block, he began small-scale farming in Edo State, Nigeria, to meet ends and to create jobs for people in his community. Initially, all went well because his older brother in Spain (Uyi) supported him with $4000 seed capital. Their initial plan was for the farmer to join the Japa train on graduation, but his dogged faith in the Nigerian dream would not let him.

Five years later, in 2019, he applied for a N10 million government-funded Agric loan with NIRSAL Microfinance Bank (MFB). The MFB is a Central Bank of Nigeria licensed institution offering loans to small businesses. Its Credit Risk Guarantee (CRS) secures agribusiness loans against losses. “But the loan came to me and others in the form of farming machines and equipment. We were told to buy these machines from Central Bank-approved vendors. When you name your machines, the bank pays directly to the vendors. Only a fraction of the loan came in cash instalments that eventually were useless because we could not order seeds in bulk,” Omoruyi explained.

In the agreement signed with the bank, farmers who default on loan repayment risk losing the machines and equipment. What if these machines do not meet their farming needs? Then the venture is fruitless. “As we speak the 50KVA generator I was supplied with by an approved vendor has packed up. It only worked for two months. It was supposed to power my grinders, millers, flash dryers and graters. I have lodged several complaints, but nothing has been done about it,” he said.

Currently, the mechanised aspect of Omoruyi’s farm is at a standstill and his debt increasing. But his cassava and yam farms are what are fanning the little flames of his Nigerian dream.

In the profound words of Thomas Jefferson, one of the Founding Fathers and third president of the United States of America, “agriculture is our wisest pursuit because it will, in the end, contribute most to real wealth, good morals and happiness.” This means so much in the African context. Over half of the world’s arable land (an estimated 600 million hectares) is in Africa, which means the continent holds tremendous agricultural prospects and ought to have gained affluence in feeding the world.

However, this is not the case as its agriculture sector is riddled with complexities, which over the years contributed to why some of its countries import food staples from other continents. According to the International Fund for Agricultural Development (IFAD), Africa spends $35 billion importing food rather than creating the conditions to grow more food locally, despite an abundance of uncultivated farmland.

Agriculture contributes 23 per cent of Africa’s GDP and 49 per cent of employment. Productivity in the sector is not massive as smallholder farmers dominate the industry. The IFAD estimates the region to hold about 33 million smallholder farms, and the farmers that live on them contribute up to 70 per cent of the food supply. A chunk of these farmers resides in rural areas, a few in semi-urban areas and just a handful in urban cities.

More than 50 per cent of farmers in this category still use crude agricultural tools for farming processes. Most smallholder farmers cater to the immediate food needs of their families. They also supply food to community markets. That means that limited produce from this agricultural segment makes it to the manufacturing sector. Nevertheless, smallholder farming is a vital aspect of sub-Saharan Africa’s agric sector and one of the continent key employers.

The growth of smallholder farming in Africa, compared to those in Europe, America and Asia, is impeded by some mundane (aside from climate change) obstacles. These obstacles have created complexities in the industry. They include internal conflicts, lack of funding, low use of mechanised farming and poor technological inputs. Again, short-term development solutions, a lack of political will, limited supportive agricultural policies, and underutilised farmlands further limit growth.

Smallholder farmers in places like Nigeria, Ethiopia, Cameroon, Mali, Sudan, and Nigeria have abandoned their farms with the rise of armed militias, internal conflicts and political instability. Some places in Africa have experienced severe climate changes that have halted farming processes and claimed lives and properties. But the farmers who still farm do not have access to funding to buy good seeds, use mechanised farming systems or smart technology. Thus, they resort to crude farming.

We stated earlier that the lack of political will, poor funding and limited supportive agricultural policies are some of the challenges peculiar to smallholder farmers. This is not because governments in the regions do not create sound agricultural loan policies or that developmental banks do not lend money to agriculture. On July 19th, the African Development Bank (AFDB) Group Board, approved more than $1 billion for an emergency food production plan. The bank targeted the facility at 20 million African smallholder farmers to end reliance on food imported from Russia and Ukraine.

The facility will see farmers in about 24 African nations access climate-smart seed, fertilizer and other support to boost Africa’s food security. According to the bank, it would further support governance and policy reform to encourage more investment in the agricultural sector. That is just one of the countless loans to fund agriculture on the continent.

When loans like these are disbursed, they usually pass through the Central Banks or a designated bank licenced by the central bank. The problem is that most government policies are not all that inclusive of smallholder farmers who are unbacked and uneducated. A huge number of these farmers do not have registered businesses or documents to access loans. But for places like Nigeria, the government has taken a step further to partner with private actors such as Non-Governmental Institutions (NGOs) to bridge the gap. But that too is a problem. There have been complaints of loan default by some of these farmers. While some farmers claimed to have lost their harvest to climate change, internal conflict and cattle herds, some lost theirs to battles with poverty.