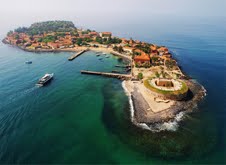 Discovering Africa – Goree Island, Home Of The ‘Door Of No Return’

Goree Island, planted in the deep blue of the Atlantic Ocean two kilometers from Dakar, is a small island with charming old houses and bougainvillea flowers gathered around a tiny cove of sand, bathed in clear water. Goree is a walking tour destination of history and controversy which one day is not enough to explore

Undoubtedly one of the most relaxing destinations in Senegal, Goree is one of the country’s tourism spots. If you like walking on streets lined quaint colonial houses the Island is a perfect destination. For centuries, the island has been both a fortress in the war indulging French and English colonies, and a free port with considerable commercial activity. In 1832, its population was 5,000 inhabitants. After the creation of Dakar in 1857, the largest part of its business was moved to the mainland, especially because of the construction of the railway between St. Louis and the Senegalese capital, Dakar. Goree was gradually abandoned to the religious communities who then opened schools. In 1931, the number of Goree’s inhabitants did not exceed 600 people.

The Island is a small 45-acre island located off the coast of Senegal and was developed as a center of the expanding European slave trade. It is indeed on the Goree Island that the first record of slave trading began in 1536 and was conducted by Portuguese, even though the first people to set foot on this island were Europeans in 1444. The famous house of slaves, which still stands up to this day, was built by the Dutch in 1776 and now serves as a museum for tourists. Today, it is considered as a memorial to the Black Diaspora.

Indeed, the millions of deported slaves, less than 500 per year have passed through Goree Island between the mid-1500s and the mid-1800s. During the African slave trade, Goree Island was a slave-holding warehouse, an absolute center for the trade in African men, women and children. Millions of West Africans were taken against their will. These Africans were brought to Goree Island, sold into slavery, and held in the holding warehouse on the island until they were shipped across the Atlantic Ocean. They were sold in South America, the Caribbean, and North America to create a new world. The living conditions of the slaves were atrocious on Goree Island.

For its rich history and its controversy, the ‘Door of no return’ and the island was named, in 1978, one of UNESCO World Heritage sites. A trip to Senegal can allow you walk on the footsteps of our forefathers and try to re-live what they went through. One thing is for sure, you can only imagine how some of them survived and managed to stay alive under such atrocious conditions.

The venue in itself is still standing and is attractive in a way that you almost feel home as soon as you set your foot on this island. You will get the chance to visit the ‘Musée de la Femme’ which means ‘The Women’s Museums’ and also the ‘Maritime Museum.’ These two museums will teach you a lot about the country’s history. But, be warned, no one should not expect to spend more than 30 minutes for each visit. Then, at the end of the day, one can finally indulge in doing nothing, but to sit and enjoy the island’s view, the dancers, the painters and the slammers. One last thing, you can also stroll along the shady streets, admire the panorama of the city, listen to the silence of nature, drink a beer in a friendly gargottes or finally have an argument with people on Senegal’s hot weather.

If you have the chance to spend the night there, your evening will be just as enjoyable. Senegalese are friendly people but who do not really appreciate people who criticize their religion (mostly Muslims) but they will always welcome you with a large plate of ‘Tiebou Diene,’ which is basically a rice dish cooked with fish and the season’s fresh vegetables such as eggplant, cabbage, carrots, tomato and more. This is the welcoming dish ‘per excellence’ for big occasions in Senegal and it can be served with local drinks and desserts.

Click here to take a virtual tour of Goree.