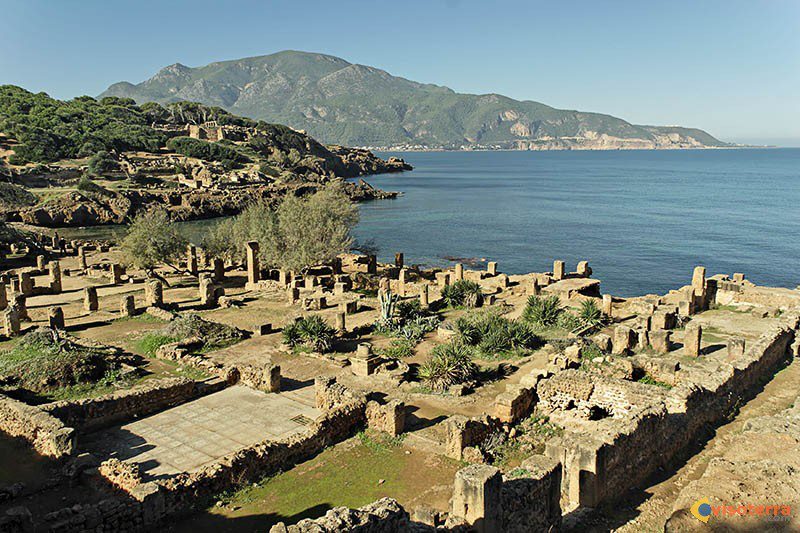 Located 70 km from Algiers – capital of Algeria – is the coastal town of Tipaza.  With vestiges of the ancient Punic and Roman civilization, the city has been listed as a World Heritage Site by UNESCO. Tipaza was an ancient Punic trading-post founded in the 5th century BC. The city’s name, which means “place of passage “or” stop, was also inspired by early Phoenicians.  But after being conquered by Ancient Rome, it was turned into a military colony by the emperor Claudius for the conquest of the kingdoms of Mauretania.

The modern Tipaza is the capital of the Tipaza Province in Algeria.  It was founded in 1857. This Berber-speaking coastal town is now famous for its sandy beaches and ancient Roman relics.

The archaeological site of Tipaza contains various relics: the remains of a Basilica, cemetery, baths and an Amphitheatre. The site is quite fragmented and difficult to read ruins, due to the fact that not everything has been cleared and much of the city is still under sediment.

The ruins consist of two main sets. The first, located outside the walls at the entrance of the modern city, is a large necropolis with the funerary Basilica of St. Salsa. The second is the Archaeological Park, located on the western outskirts of the city, which includes most of the monuments uncovered. Near the harbor you will find a museum or discoveries have been stored.

Originally a Punic foundation in North Africa, the city has beautiful beaches, reliefs of Chenoua and Dahra offering a unique landscape and a great tourist attraction. Many Punic, Roman, Christian and African reflect the rich history of this colony. Also, Tipaza houses some archaeological heritage at the port, the museum and the archaeological park and it is an ideal ecotourism destination, so visitors can experience part of the city, which is still under sediment.

The town is easily accessible due to its proximity to the capital Algiers is only 70 km away. The link road is by car or bus. With a sun that reaches 30 ° C and no rain in the summer, Tipaza is perfect for the beach! Softness and moisture in winter, the weather is generally nice. Spring and autumn are the most favorable seasons for exploring the city.

Although Tipaza is not must-see if you are planning a trip to Algeria, but you  can take  time to visit the archaeological site and Roman ruins (with complete museum your), take a swim and enjoy leisure beach.