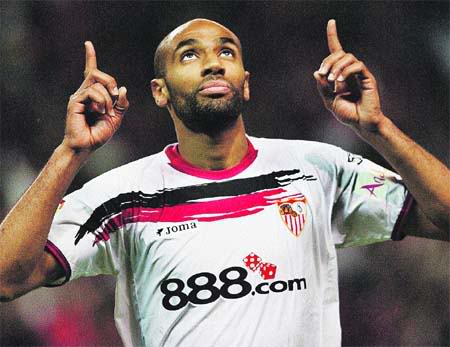 It seems the Chinese League will be the new haven for African footballers. First, Ivorian Didier Drogba sealed a lucrative move to Shanghai Shenhua FC and then Nigerian International Yakubu Aiyegbeni also left England as he signed for Guangzhou R&F.

Kanoute has reportedly signed a two year deal with the club who currently lie in third place in the Chinese league standings.

The Malian international enjoyed a successful spell with Sevilla winning back to back UEFA Cup trophies in 2006 and 2007 and Copa Del Rey medals as well as being crowned Africa’s best player for 2007.

In a related development, Kanoute’s compatriot and Barcelona midfielder Seydou Keita is reportedly closing in on a move to Chinese side Darlian Aerbin. Keita is free to leave the Spanish side as he did not play up to 50 percent of games for Barca.

According to Chinese news agency Sina, the deal to leave Barcelona may be sealed this weekend. However, club chairman Li Ming while not denying knowledge of the move, claims he is unclear about it.

“I was also unclear where this news was from, it was only a bit later that I found out,” Li Ming is quoted as saying by sports website Hupu.

“We only need a foreign signing from Asia and I am putting all my effort into this matter. However, I have also heard about this. Whether there is someone else working on this, I don’t know. At this end, there is no news of this kind,” he concluded.