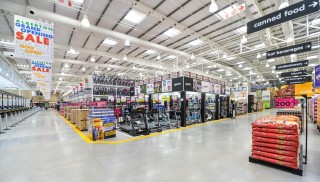 South African retailer Massmart has only managed to add less than 10 stores to its existing 25 outside its home market of South Africa since 2010, despite having the financial back of dominant US retailer, Wal-Mart.

South Africa’s third biggest retailer, which retails the whole shebang from food to electronics, has fallen behind competitor Shoprite, which has doubled its stores to 300 within the same period.

Wal-Mart acquired Massmart for $2.4 billion about five years ago in a move the company described at the time as a gateway to high-growth markets in sub-Saharan Africa, but despite the mega-money deal and continuous injection of cash, growth remains very slow for the South African retailer.

Massmart’s slow trajectory into the African continent points to the problems of conducting business in Africa. “From the start the Africa Rising story was a bit euphoric when looking at it from a retail point of view and Wal-Mart is now facing the reality,” Boris Planer, an analyst at London’s Planet Retail, told Reuters.

Wayne McCurrie, a fund manager at Momentum Wealth, insinuated that Massmart has been daring enough in its bid to pursue a radical expansive push. He said: “If you want extra growth, you’ve got to take on that extra risk.”

“Recognising that risk, by that I mean a severe shortage of shopping infrastructure, Shoprite started setting up warehouses and partnering with developers to build shopping centres and that’s why it is in this quick store rollout phase whereas Massmart is a little bit behind,” he added.

Guy Hayward, Massmart CEO, has admitted that Massmart will have to play catch up with Shoprite as it strives to penetrate Africa’s key growth regions.