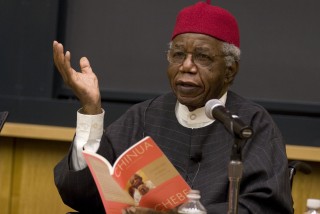 “Why do I say that the story is chief among his fellows? Because it is only the story [that] can continue beyond the war and the warrior. It is the story that outlives the sound of the war-drums and the exploits of brave warriors. It is the story, not the others, that saves our progeny from blundering like blind beggars into the spikes of the cactus fence. The story is our escort, without it, we are blind” – Anthills of the Savannah

It wasn’t adding up. I had finished a book in just over an hour, in one sitting, and the depth of the story, the development of the characters, the intricacy of the plot and perhaps, most amazing of all, the simplicity of the language bewildered me. Then it happened again and again and thus began my affair with Chinua Achebe’s works.

Complex language is synonymous with literature of a certain calibre. Seven syllables, Webster’s within close proximity, pursed lips and furrowed brows. Classic symptoms of the sadomasochistic nature of quality literature. He managed to deliver all the pleasure with none of the discomfort. The simplicity of the language and the fluidity of the story set a template that many writers, myself included, admire and have struggled to emulate.

The period in which he wrote the majority of his published works was one punctuated by quite a number of African societies still in their formative stages. And in a bid to establish African identity independent of the colonialists, a lot of artists, writers and musicians reflected revolutionary ideals in their work, mostly bordering on radicalism.

I greatly admire the fact that Chinua Achebe chose to fight, not against the western culture, but against Western/African ignorance. Rather than radically oppose the wrongs in society, his approach was to present history in a way that showed the past as more than the archaic darkness that was portrayed by the white man. This in itself did quite a lot to partially restore African, Nigerian, and cultural dignity and, by extension, inspire a sense of respect from the invading outsiders.

I once read that if you can’t explain stories to a child then you don’t truly understand it and I think 7-year-old me will agree that Achebe truly understood the art of storytelling with the effortless way he told his profound stories.

Achebe’s works couldn’t be curtailed by time or space. When he wrote, he wrote for time to answer to his words, and for space to bow in reverie. He wasn’t a prisoner to opinions of his art, as he famously told us to write our own story if we didn’t like his. He was confident! You could tell from how he occasionally gave his book readings, and how he deliberately reminded us that “Things Fall Apart” wasn’t the only book he had written. He lived with purpose; to imprint in our hearts the African dream and make it possible too for us to tell our story with no remorse. Because our “story is chief”.

This article is the third in our ‘Chinua Achebe: A Man of the People’ series. Ventures Africa is celebrating and honouring Chinua Achebe, one of Nigeria’s most influential and celebrated writers. His birthday is on November 16.