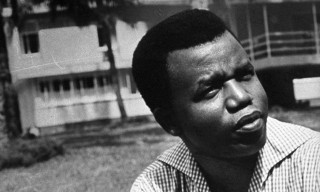 Dear Chinua Achebe, you taught me how to read

Chinua Achebe taught me the art of reading. Not in the sense of ABC but in the beauty of reading underneath the lines and finding home in the empty spaces that demarcated paragraphs.

His books are not as simple as he led us to believe. They are calm, like the waves when they wash over the sand and as turbulent as when they leave the shore to return again.

When I was younger, I used to examine Achebe’s picture, and wonder why his laugh lines were so deep. Old age wasn’t the cause, I told myself. Achebe couldn’t have been plagued by the common man disease. So to suit my propaganda, I came up with a theory: His brain had no more room for knowledge and that it created space for the rest to lay their head on, on his face.

He invented a new way African stories were told. Simple enough to debunk the fallacy that our paragraphs needed to be filled with tongue twisters before exuding brilliance. And intricate enough to break down societal structures one sentence after the other. There were layers and layers to the simple words he spewed.  Short novels of roughly 300 pages felt like you had immersed yourself into a world that knew no end. With his constant passion for telling stories of the African dream (or reality), he helped us to understand that our deep African heritage wasn’t inferior and our language stood as tall as the white man’s English.

Every book he wrote was like a continuation of the last. And in every book, he addressed colonialism, westernisation, and politics, not in an aggressive manner, but like a mother, who rebuked her child with her left hand and consoled her with her right.

He educated us and awakened a new enthusiasm for us to write our own stories­­–stories that question a system in the most human and realistic way possible.

With Chinua Achebe, there was no end, just where he decided to leave the story.

“Writers don’t give prescriptions. They give headaches!”

This article is the first in our ‘Chinua Achebe: A Man of the People’ series. Ventures Africa is celebrating and honouring Chinua Achebe, one of Nigeria’s most influential and celebrated writers. His birthday is on November 16.