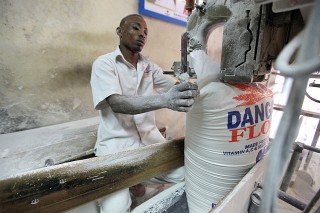 Tiger Brands bought shares worth $150 million dollars in Dangote Flour Mills in 2012, gaining a 63.35% stake in the company, making it the majority shareholder. The majority shareholders also accrued debts of about a $100 million from the sale. When asked, why he sold the majority stake, Dangote said the decision was in line with their plans to diversify.  However, it is likely that this was not the case. Dangote Flour Mills was actually in crisis; and Tiger Brands was its savior. However, despite this attempt to save the business, Dangote Flour Mills revenue still fell in the first half of 2013, with a loss of about $26.8 million. Tiger Brands responded by indicating a readiness to increase its stake in DFM to 70% but the plan did not see the light of the day.

While Tiger Brands recorded profits in South Africa, DFM was holding it back. DFM was being affected by falling oil prices, the devaluation of the Naira and the subsequent increase in the price of imported wheat. Things came to a head when TBS recorded losses because of DFM. TBS told investors in May 2015 they would have to raise money from DFM by selling shares, but it seems they retired the initial plan. DFM was termed ‘a big liability’ by an analyst in Cape Town. TBS revenues rose, when they decided to reduce financing DFM in Nigeria, which would have a great impact on DFM (its majority shareholder cutting its losses) and is likely why Dangote and co. resigned.

This announcement is a big hit for Dangote, but considering that TBS and DFM were at odds, it was perhaps a smart, yet difficult choice.