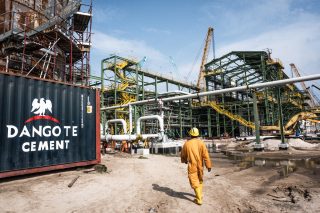 In contribution to Nigeria’s content development initiative, up to 120 local contractors have been awarded contracts worth $368 million at the ongoing Dangote Refinery and Petrochemical plant. The disclosure was made by Group Executive Director, Strategy, Portfolio Development and Capital Projects of Dangote Industries Limited, Devakumar Edwin.

While addressing members of Nigerian Union of Journalists (NUJ) and Nigeria Institute of Public Relations (NIPR) during a facility tour at the plant on Monday, Edwin revealed that there are several Nigerian content opportunities in the company’s latest project. The landmark integrated refinery and petrochemical project – regarded as the largest industrial complex in Africa – is expected to take Nigeria to new heights by transforming the economy.

Moreso, the refinery would lead to significant skills transfer and technology acquisition opportunities in the country. Consequently, the company is already partnering with the Lagos State government and Siemens in skills development programs for members of the local community for employment at the construction site, with 250 artisans trained and employed already.

“The third batch left for India classroom training for one month, on the job training for one year and working in real time with experts in the industry every day,” the executive stated, adding that 3,580 Nigerian personnel have been employed so far, excluding employment by the various contractors and subcontractors at the site.

The contributions of the Dangote project towards the Nigerian society so far, especially in terms of employment, are commendable and offer Nigerians an inkling of the extent of Dangote’s investments in Nigeria’s human resource. Albeit, there have been controversies recently that stem from the alleged sack of about 300 Nigerian maritime workers – replaced by Chinese crew – at the ongoing refinery earlier this month.

The Nigerian Merchant Navy Officers and Water Transport Senior Staff Association (NMNOWTSSA) and the Maritime Workers’ Union of Nigeria (MWUN) described the sack as a “matter of urgency” in a letter written to the Nigerian Maritime Administration and Safety Agency (NIMASA), in which they stated that the Nigerian crew working on the Refinery were sacked because the vessel managers claimed they do not need Nigerians working with them. The vessel is owned by COOEC China, while it is managed by Anglo-Eastern Ship Management.

The incident was denounced by combined seafarers from both labor unions, who raised an alarm over the influx of Chinese sailors taking over seafaring business onboard vessels in Nigeria’s territorial waters. They explained that the influx of foreign seafarers into the country’s maritime industry is in non-compliance with the nation’s Cabotage Act and sends a wrong signal to the international community.