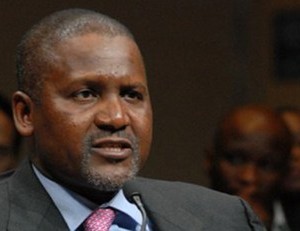 Reports from the Nigerian Stock Exchange (NSE)  indicate that Dangote Cement Plc is seeking an extension of the free-float waiver it secured from the when it merged with Benue Cement Company Plc two years ago.

The 24-month waiver extension is to enable the company remain listed on the stock exchange despite maintaining a free-float that is below 25 percent, a violation of the NSE requirement for listed companies.

It would be recalled that out of the companies listed on the Nigerian bourse, Dangote Cement and Union Bank of Nigeria Plc are the two listed companies not maintaining a 25 percent free-float.

In the same vein, the public only owns less than 25 percent equity of Union Bank, while more than 75 percent is controlled by Asset Management Corporation of Nigeria (AMCON) and Union Global Partners Limited (UGPL).

Experts blame the NSE for the violation of rules by both companies. They argue that this is evident in its inability to enforce post-listing requirements.

According to a report by Lagos-based newspaper THISDAY, the exchange claims that the waiver gotten by Dangote Cement in 2010 will elapse on October 26, 2012. It also added that it has received official application for waiver extension from the company.

“The council of the exchange favourably considered the request of Dangote Cement for a 24-month period of extension within which to comply with the minimum free-float requirement, that is, by October 26, 2012. During this period, the company was expected to commence plans to undertake a dual listing on an international exchange. Dangote Cement Plc has however intimated that, the October 2012 deadline might not be feasible given the enormous requirement for a dual listing and has therefore requested for additional 24 months to comply,” the bourse said.

Concerning Union Bank, the exchange said it had requested from the bank a detailed plan on how the financial institution plans to achieve the minimum 25 percent free float requirement.