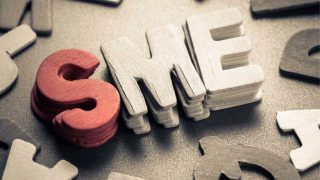 From COVID-19 to #EndSars: It’s been a rocky year for SMEs in Nigeria

The survival rate for Small and Medium Enterprises in Nigeria has taken a massive hit this year amid a general slump in economic activity. A sharp drop in global crude oil prices, on the back of the coronavirus outbreak, slammed the country’s oil-dependent economy. The pandemic, which took a full course in the first two quarters of the year, has largely contributed to suffocating businesses small and large. But while bigger players have the financial muscle to navigate through the tides, the mortality rate for SMEs has only increased.

As of 2017, only about 20 percent of SMEs manage to survive in Nigeria according to a United Nations report. That is largely due to unfavorable economic conditions and high cost of doing business, which has only been made worse by the coronavirus crisis. With government finances stretched, President Muhammadu Buhari in September approved the removal of subsidies on electricity and petrol just after interstate movement restrictions meant to curb the pandemic were lifted. For a country where the average resident relies on petrol to power their alternative means of electrical supply (generator), SMEs were hit hard as running costs skyrocketed.

But as businesses tried to recoup from the pandemic, oil price crash, and the government’s subsidy removal, Nigerian youths in early October began nationwide protests tagged #EndSARS. The protests, which were targeted at brutality by a rogue police unit – the Special Anti Robbery Squad – and a call for comprehensive police reforms, lasted nearly two weeks. With more than 50 percent of the young population in Nigeria is directly or indirectly involved in entrepreneurship, the protests largely disrupted business operations.

The largely peaceful demonstrations soon turned violent across the country with reports of injuries and deaths from clashes between hoodlums and security operatives. Many state governments were thus forced to implement one-to-three day curfews to rein in the unrest, bringing to a halt much of economic activity and interstate travel and further affecting SMEs.

Ventures Africa spoke with a couple of SMEs across the country on the impact of the #EndSARS protest, having suffered from the pandemic already. Each business owner seemed to have shared experiences, although geographically apart from each other. Below are some of the responses we received from SMEs in Abuja, Katsina, and Lagos:

For Usman Ahmad Aliyu, co-founder and business manager of Abuja-based Mekino International Skill Acquisition Academy Ltd, the #EndSARS protest has had a serious negative effect on his business but he remains fully in support of the cause. “Every business activities were grounded in Abuja because protesters blocked all the major roads in and out of FCT so you couldn’t even move about. So how will you carry on your normal business activities? Even though the protest had a huge negative effect on my business, I support the protest 100 percent because, the truth is that so many things are wrong in this country, not just police brutality.”

Another business owner in Kastina state spoke with us on the impacts of the protests on production activities in the state. Chief executive of House of Gijo Jennifer Eboh says the protest did affect her business and most businesses in the state even though no protests were carried out there. This, she said, was because the majority of her raw materials are shipped from Lagos due to low cost and higher quality.

“I couldn’t get my orders during this period, which affected my delivery. The transportation cost of my goods down to Katsina was enormous. Yesterday I lost a client because he couldn’t afford my charges. I had no choice. I can’t do business at a loss,” Eboh said. House of Gijo is a multifaceted enterprise that focuses on the commercial production of pastries, snacks, and cake, makeup services, sales of beauty products, and training.

In Lagos, we interviewed another SME that is into agricultural processing and event management, Toybetty Foods Ltd. According to founder Oluwatoyin Segun Samuel, “the company’s stock decayed because I could not access my office for one whole week. I did not know that PHCN had interrupted power for an extended period of 5 days so all my foodstuff in the freezer went bad.”

Not long after the final day of the #EndSARS protests, Fagba-Agege region of  Lagos where Toybetty is located, experienced what many have called an “inter-tribal war” between the Hausas and the Yorubas. Fagba market, which is one of Lagos’ main abattoirs, has many northerners offering butchery and trading services. According to Samuel, “the market was completely raised down. Even my neighbours who reside in the estate close to the market had to flee their homes for days. Right now, I feel so discouraged because I can’t count my losses these few days.”

As small business owners in Nigeria count the costs of this year’s disruptive events, which have permanently put several startups out of business, state governments and several private sector players have stepped up to help businesses affected by the protests recover, launching a number of relief grants and zero-interest loans. But this year will go down as an historically terrible, and probably the worst ever, for most SMEs in the country.