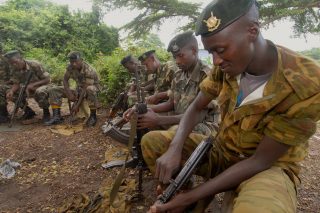 Could the purging of Burundi’s army along ethnic lines lead to genocide?

According to a France-based human rights group, the International Federation for Human Rights (FIDH), Burundi’s ruling party in a campaign of repression is purging its army officers along ethnic lines. The group has also accused the international community of inaction amid deadly political violence in the East African country, stating that the division along ethnic lines is more political than it is ethnic.

The FIDH report further stated that hundreds of Tutsi soldiers in the national army have been murdered, have disappeared have been or detained, and others have deserted the army. Added to that, the Hutu ruling party lays blame on the Tutsi minority ethnic group for the instability and volatile nature of the country. Tutsis make up 14 percent of Burundi’s 10 million people, while Hutus are about 85 percent of the population.

Without a doubt, the continuation of this conflict in Burundi would garner the attention of global powers because the fortunes of the country are so intertwined with its neighbour, Rwanda, where over 800,000 people were killed in the 1994 genocide.

Conflicts and killings have been prevalent in the country since 2015 when President Pierre Nkurunziza sought a third term. His announcement and subsequent victory led to conflicts that left over 500 people dead.

The FIDH report said that the purge of officers from the Tutsi ethnic group comes as President Nkurunziza, a Hutu, consolidates power following more violence that has killed at least 1,200 people. “This … risks leading to the breakup of the army and pushing a number of soldiers toward a military opposition, which would be synonymous with a new civil war.”

The former soldiers of the Tutsi-dominated Burundi Armed Forces (FAB), called the ex-FaB, are the victims of growing targeted repression. FIDH stated that “this campaign of targeted repression against ex-FAB has continued and intensified since the start of 2017.”

Reuters reported that a former army spokesman, Colonel Adolphe Manirakiza, confirmed that Tutsi officers were being targeted and said he went into exile after finishing a tour of duty with the United Nations in the Central African Republic due to safety concerns.

“By attacking Tutsi officers, it is clear that the Burundi regime is planning a] genocide. It wants to constitute a mono-ethnic army composed mainly of Hutus, and it will be easy for the regime to complete its plan of genocide,” he said.

Since November 2016, the Federation has documented more than 120 cases of assassination, attempted assassination, arbitrary arrest, torture and forced disappearance by authorities against ex-FAB soldiers.

The report also shows that the complete centralization of power into the hands of the Burundian authorities over the past two years doesn’t seem to be enough. This appears so because on February 15th, 2017, the current government passed a law that mandated a commission to launch a project for change in the Constitution. This change would allow unlimited presidential terms and would guarantee President Nkurunziza the possibility of remaining in power indefinitely. On December 30th, 2016, the president had already mentioned in a Question and Answer session at Rutana, in the South East of Burundi, the possibility that he may run again for office in 2020.

However, the government in Bujumbura rejected the findings of the report. Martin Nivyabandi, the human rights minister said, “That report contains untruth, exaggerated figures.” Adding that it was designed to manipulate the international community.

The report which draws on a network of underground rights activists offers a rare glance into the inner workings of the military in a country where many journalists and activists have been banned or fled.

Following antecedents of the past events that led to the first genocide in the East African nation, divisions along any divide whether political or ethnic have not yielded profitable returns.