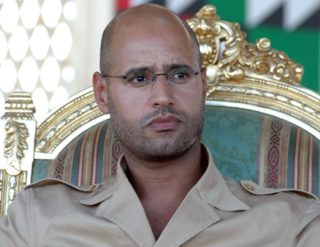 Could a troubled election restore the Gaddafi family to Libya’s ruling class?

Ten years after the beginning of a civil war that devasted the country and saw Muammar Gaddafi’s regime toppled, his son, Saif al-Islam Gaddafi, fancies himself the next leader of Libya. With the country’s divided leadership finally agreeing to hold elections on December 24th, a historic chance for reconciliation and peace arises, but Saif al-Islam’s ambitions and decades-old gripes could plunge Libya even deeper into chaos.

For years, Saif al-Islam Gaddafi lived the archetypal life for the son of a dictator. His well-documented pleasure-seeking lifestyle made him one of the most recognized people in Libya. Without ever holding any official function in the government, he was one of the most powerful men in the country and was widely seen as the regime’s heir apparent.

Muammar Gaddafi invested heavily in the political future of his anointed successor, paying millions of dollars in “donations” to the prestigious London School of Economics in return for a PhD obtained by Saif al-Islam in 2008. The debut of the Libyan Civil War in 2011 brought the deal to the public’s attention, causing much embarrassment to LSE and resulting in its director’s resignation. Worse still, Gaddafi’s doctoral thesis is now believed to be either plagiarized or ghostwritten.

But the fall of the Gaddafi regime derailed the patriarch’s succession plans and turned Saif al-Islam from a self-styled reformist leader that rubbed shoulders with the Western elite to the face of the brutal crackdown perpetrated by regime forces against anti-governmental protests. After the fall of Gaddafi, Saif was imprisoned for six years by one of the country’s competing authorities and sentenced to death in absentia by the other. Now aged 48, Saif al-Islam is busy behind the scenes with preparations for a run on the presidency. However, his hopes of using the 2021 election to elude the last ten years of history and return to the path that was set out for him by his father could be detrimental to the stability of Libya.

The 2021 election is the latest effort by the Gaddafi family to return to power. Since being released from prison in 2017 following a general amnesty, Saif al-Islam worked to release other members of his family from captivity and rebuild the family’s support. He was one of the frontrunners of the 2018 election – which was cancelled – but is likely to still receive backing from significant parts of the population in Sirte and other cities where members of the Gaddafi clan are numerous.

While Saif hasn’t officially confirmed he will participate in the December elections, a series of recent moves demonstrate that he means business. In 2019, it was reported that he began collaborating with international paramilitary groups to offer him assistance and training, particularly in regards to counter-intelligence. He is also gathering allies, both local and international, for a potential return to power.

The December elections are the result of a ceasefire signed in October 2020 between Field Marshal Khalifa Haftar, the powerful military leader who controls the Tobruk-based Libyan National Army, and the Tripoli-based authorities. These significant breakthroughs between the two competing authorities in the country signal that Libya’s main stakeholders seem determined to find a peaceful end to the conflict. But a possible candidacy by Saif al-Islam could throw a spanner into the works and halt the progress made so far.

The diplomatic breakthroughs that took place during the spring of 2021 have given Libya hope for an end to the division and civil war that has gripped the country for the last decade. But the ice is still very thin and the elections that will hopefully take place in December will only be as legitimate as the participating sides consider them to be.

To put it another way, the tensions between the main political entities of Libya are so high that it is far from assured that the result of the December election will be accepted by all participants. A third party, particularly one as polarizing as Saif al-Islam Gaddafi, could cause a breakdown in the fragile agreements between the Tripoli and Tobruk governments. Both a Gaddafi victory and a contested defeat could rekindle animosities between Libya’s east and west. Ten years after the death of the dictator, discord over the Gaddafi name could throw Libya into chaos once again.