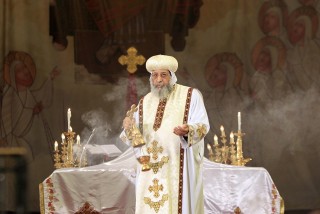 At the centre of Cairo, Egypt lies the ancestral home of a sect of believers, different in their own way, worshiping their deity, but never in peace. They have long been subjected to brutal reign of emperors who sought to exterminate them for their difference in the view of the deity they serve. It was initially the Roman Empire, then the Arab dynasty, but in the present day Egypt, Coptic Christians are persecuted by their fellow Egyptians. Despite the agelong persecution of this group of Egyptians, they have resolved to stay put until the very last. They are the members of the Egyptian Coptic Orthodox Church.

They were in the middle of a morning mass on Sunday December 11, 2016 when, oblivious to them, an enemy crept in, bearing his hatred on his thumbs, he pressed the death button that sent 25 of the worshipers–women, children, young adults full of life and dreams–on an undesired journey in the most gruesome way. And the end of the day, it was another episode of the agelong persecutions of the copts initially done legitimately by rulers but now carried out by outlaws and extremists and, if not for the renovation of the St Mark Cathedral that make the leadership of the church conduct the mass at St Peter which was close by, the casualties will definitely have been more, without justification.

The recent terror attack defines a persecution which the church has endured from those who view them as religiously incorrect. The Egyptian Coptic church was established between  AD 42 and AD 62 after the order of St John Mark who took Christianity to Egypt. A lot of the Old Testament prophecies have been explained to be directed at the church, even as parchments and manuscripts of what came together to form the New Testament were found around one of the parishes of the church in Bahnasa. A fragment of the gospel according to St John was found in Bahnasa. Such was the rich history and establishment of the church.

The church reportedly kept Egypt a Christian nation decades after the Arab conquest of Egypt. The church and the worshipers were reportedly spared by the Prophet who described them as “protégés,  kith and kins.” However, they were charged to pay a special tax called “Gerya” for protection. The ambience between the church and the Arabs, however, turned sour when the Arab dynasty in the mid-12th century reformed the “Gerya” introducing a condition that failure to pay would mean either a conversion to Islam or loss of protection, which could mean death. While a good number of the church members were able to do this, majority of the members converted to Islam, and gradually, the Christians were pushed to the corner. Not only did the dynasty forbade the repair of old church building, the building of new ones was also outlawed. The presence of the Christians nonetheless slowed down the transformation of Egypt, a Christian majority nation, to a Muslim country. However, the adoption of the Arabic language as a means of communication coupled with a number of Christians becoming Muslims eventually made the country an Islamic state. But for the church, the Coptic language, which was the original Egyptian tongue, remains the language of liturgy.

Amongst the community of Christians, the Egyptians Copts which make up 90 percent of Egyptian Christians are seen as nonconformists after their separation from the other group of Christians, made up by catholic and the protestant churches, in 451 AD. The Coptic church, which has over one million members outside Egypt, was separated from the other group of Christians in 451 AD after the council of Chalcedon ruled that Jesus Christ was “one hypostasis in two forms” (one person showing two distinct natures), as against the Copt’s believe of Christ being “one hypostasis from two natures” (one person formed from two distinct nature). The former thus became the orthodox knowledge of the formation of the body of Christ taught amongst the larger body of Christians.

Before the recent attack on the church in Cairo, the church was attacked in January 2010 when three Muslim men gunned down about 7 Christians and a Muslim bystander in what has come to be known as the Nag Hammadi massacre. A year later in January 2011, a car bomb was detonated at the entrance of the Coptic Orthodox church in Alexandria where scores of people were killed. After President Morsi was overthrown in 2013, church members became targets of islamist who accused them of backing the army. In one of such events, three people died when gunmen on motorcycles opened fire on a wedding party outside the church in Cairo. Earlier in June 2016, a priest was also killed in an attack claimed by ISIS. These are some of the major attacks on members of the Egyptian Coptic community in recent years.

The president of Egypt, Abdul Fattah al-Sisi, at a state burial mass organised for the victims of the December 11 bomb blast, said three people have been arrested in connection with the attack. Following the arrest of suspects, the Christian community can only hope the Egyptian government, which has been blamed for releasing suspects in the past, would ensure justice and a more liberal Egyptian society for Christians.