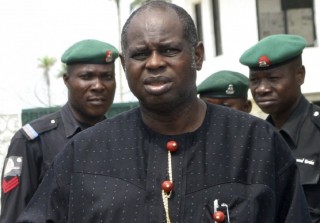 Controversy aside, who was Diepreye Alamieyeseigha?

Popularly called the ‘Governor-General of the Ijaw nation’ in his lifetime, former Bayelsa state governor, Diepreye Solomon Peter Alamieyeseigha (DSP), was a man who struggled to rid himself of a reputation as an alleged unrepentant corrupt politician.

Alamieyeseigha died of a cardiac arrest on October 10, 2015 at the University of Port Harcourt Teaching Hospital (UPTH) at the age of 62. Esueme Kikile, the Bayelsa state Commissioner for Information, released a statement to the media regarding the cause of death which stated that Chief DSP Alamieyeseigha died of complications from high blood pressure and diabetes which affected his kidney. He had chronic kidney disease which was aggravated by the sudden rise in his blood pressure, Premium Times reports. However, aside from the controversy surrounding the cause of his death, here are a few key points that mark the timeline of his political career in Nigeria.

Long before his venture into politics, DSP Alamieyeseigha was a cadet officer in the Nigerian Defense Academy in 1974, and ultimately retired in 1992 as a squadron leader. In the early 90’s he oversaw the budget, planning, research and development of the National Fertilizer Company (NAFCON) in Rivers state and later on became a Plant Services Manager.

After a brief stint as a Special Assistant to the Minister for Information in 1993 and a glowing background in the Nigerian Airforce due to his record as the first ever commissioned Nigerian Air Force Officer to receive the Nigerian Air force ensign of regimental colors from a Head of State, Alamieyeseigha began his journey into politics.

Alamieyeseigha became the first democratic governor of Bayelsa state in 1999 and later won his re-election in 2003. However, his seemingly good record as governor in his state, was wiped clean when in 2005, he dressed up as a woman to escape from the United Kingdom to Nigeria over £1.8m money laundering charges. He was arrested earlier in September 2005 in the UK after police found £1m in cash at his London home and property in his name worth £10m.

A request which the Buhari administration was ready to approve as indicated by the Chairman of the Presidential Advisory Committee on Corruption, Professor Itse Sagay.

Sagay said, “The UK is in principle correct to be making such a request based on the fact that the crime was committed on the British soil. However, when there is delay in trial as a result of time, there may be consideration on legal grounds so that the trial is not seen as oppressive” reports Channels Television.

Although many tales surround the death of the former governor, some praise him for being an exemplary leader, like ex-Delta state governor, James Ibori who alleges that Alamieyeseigha only owned one house and was not corrupt, but rather the victim of ‘virulent politics’.