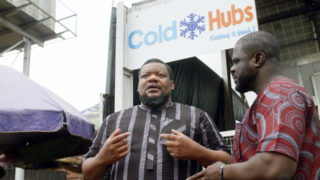 ColdHubs will expand into new markets thanks to a $500,000 grant from Heifer International

Food waste is a global issue; one-third of all food produced is never consumed, 1.2 billion people go to bed hungry or undernourished, and the adverse effect of food waste on the global economy is in trillions of dollars. The African continent is not exempt from this problem, with 50percent of fruits and vegetables, 40percent of roots and tubers, and 20percent of cereals—all of which are staple foods—lost in the post-harvest stage or processes. Africa spends $35 billion on food imports each year, a figure that would rise to more than $100 billion by 2030.

The cause of food waste ranges from poor handling, a lack of storage and transport facilities, irregular power, and a host of other factors. Of the 10 million smallholder farmers in Africa farming fresh produce, 36 per cent have access to the grid, 62 per cent can not afford cooling technology. The remaining two per cent is serviceable and constituted by 225,000 farmers in 2018.

These challenges influenced Nnaemeka Ikegwuonu to establish ColdHubs in 2015 to help farmers prevent post-harvest losses. ColdHubs is a solar-powered walk-in cold room for smallholder farmers in farm clusters and outdoor markets to store and preserve fresh produce 24 hours a day, seven days a week, extending their shelf life from two days to more than 21 days. The solar panels on each hub are linked to a battery storage system, allowing the coolers to operate off the grid all day.

With the COVID–19 pandemic came lockdowns and movement restrictions to stop the spread of the virus. Balancing food supply and demand became a major issue for farmers because people were not mobile and markets were closed. ColdHubs was adversely affected by this. But with the new investment Nnaemeka Ikegwuonu, Founder of ColdHubs received as a co-winner of the US$1.5 million Heifer International AYuTe Africa Challenge, things are beginning to look up for his business.

In this interview with Ventures Africa, Ikegwuonu discusses the effect of the pandemic on his business and his expansion plans with the investment from Heifer International.

My name is Nnaemeka Ikegwuonu, and I am the founder of ColdHubs. Before establishing ColdHubs, I ran a smallholders foundation. It was a rural development organization that produces agricultural radio programs to improve the knowledge and skill set of smallholder farmers in Nigeria. We planned to educate farmers in Nigeria through educational radio programs and practical demonstrations.

How does it feel to be one of the winners of the AYuTe Africa Challenge?

We are happy. The major thing is that the support coming from Heifer International is a large and significant response to problems in Africa. Heifer is joining ColdHubs as a partner to support our business strategy, amplify our communications and digital marketing, build robust operations for the work we are doing, and assist us in bringing our strategy to scale.

We are happy that the award is coming at this time because it is unlike any other prize or Agri-tech competition. This prize comes with incredible media support, which will tell the ColdHubs story to several organizations and companies willing to invest in our work. It appears to be inspiring young Africans to see agriculture as a viable career option.

What prompted you to establish ColdHubs?

When I used to run my agricultural radio programme across the country, I had the opportunity to sit with farmers to identify their challenges and opportunities in the agric space. Once, we were doing a radio programme in Jos, Plateau state, around cabbage. The radio programme was to educate farmers on proper cabbage cultivation, weeding, and harvesting. The last episodes focused on marketing. We went to Faringaga market in Jos to look at cabbage marketing to gain real-world experience from farmers, and we saw a lot of cabbages being wasted in the market.  We spoke with these farmers who stated that they would appreciate cold storage and any form of storage that would allow them to keep their harvested cabbages and bring them to market. And that whenever they want to sell, they can go to that storage facility and collect some stock for sale.

Then, it struck us that there was no form of cold storage in farms, aggregation centres, or markets. So we formed a small team and a foundation to build a prototype. The prototype was well received. We took it to 11 states and the majority of the users told us that they wanted to be able to own it, maintain it, and rent it. That birthed the idea for ColdHubs in 2015. The company was established based on research from the Smallholder Foundation. The reason for this was to have a company that will drive the commercialization of technology, rather than being part of a typical NGO that focused on agricultural education.

How did the pandemic affect your business, and how did you deal with it?

It had an impact on our work. In 2019, we had revenue of $77,000, but last year, it was only $26,000. As a result of the lockdown, which forced markets to remain closed from March to September, we had an awful year. We could not do business because our cold rooms were inside markets. We had a few cold rooms in farm clusters, but these were to keep the business afloat. Even after the ban on movement was lifted in September, we could not start doing business right away because most of the cold rooms were in the market, and most markets opened three times a week.

Aside from the pandemic effect, what other challenges do you face while providing your service?

Because the majority of our customers are at the bottom of the pyramid, payments are often in cash.  Because they are not digitally savvy, these traders do not know how to transfer money and are impatient using POS machines. They do not trust anything except cash payments. To them, that is when a transaction has occurred. As a result, hub operators in each cold room are in pairs, an operator and a market attendant.

But even this is not sustainable as our hub operators would have to handle a lot of cash. We are planning to scale from 54 cold rooms to about 100 cold rooms early next year, and we think that at that scale, it will become tedious to monitor finances. As a cash-based business, we are looking at digital payment platforms that we can use, but our customers are not familiar with digital payment platforms. That is a challenge.

The second challenge is that most of the markets we want to set up hubs in are densely populated, so it is hard to get land. For instance, getting land in Mile 12 market in Lagos could take about three years due to back-and-forth negotiations. The most valuable asset in the market is a piece of land because where you are situated determines how successful your business will be.

How did you get funding before being awarded the Heifer International prize? Do you have any investors?

We do have investors.  At its inception in 2015, we sold 20 per cent of the company to US investors, Factor E Ventures. We were able to deploy five cold rooms and continue deployment with that funding. We have also raised a lot of grant money by applying for grant opportunities. That’s how we have been able to accelerate the deployment of cold rooms, from the first one in 2015 to the 54th one at the end of 2020.

With the Heifer prize award, what should we be expecting in your business?

First, with the prize award, we are deploying ten cold rooms to the Southwest of Nigeria. That brings our cold room numbers to 64. We also have additional grants and donors who are also supporting expansion. But the good thing is that we have 8units of our cold rooms going to the Southwest, one unit of the 100-tonne cold room going to Imo state, and one other unit of a 100 tonnes cold room going to Kaduna, Zaria. With this, we can connect both of them to a future refrigerated transportation service.

So how much does it cost to use your service?

How many people are currently in your workforce? And how would you describe your impact so far?

We currently have 68 people, 54 of them are hub operators. 14 are secret level and lower-level officials.

In terms of impact, I think we have done very well. Last year, we saved 40,200 tonnes of foodstuff spoilage, and we were able to increase the income of 5,250 farmers, retailers, and wholesalers by 50 per cent – from $60 to $120 monthly. We were able to facilitate the deployment of 40,200 tonnes of nutritious, hygienic food for Nigeria’s consumption. Food with no contamination, no loss of quality, no discolouration, no loss of texture, and no loss of water.

By 2020, we had trained and hired 54 women to work as hub operators and market attendants. We saved over one million kg of CO2 that year by using only solar energy to power all of our systems. No ColdHub has a diesel generator or an LPG generator. We run our cold rooms entirely on renewable energy.

What is your market reach presently?

We have ColdHubs in 38 locations across 22 states in Nigeria. They include Yobe, Bauchi, Nasawarra, FCT Abuja, Lagos, Edo, Rivers, Enugu, Benue, Owerri in Imo state, Umuahia in Abia State.

What are your plans for the future, are there plans to go to other African countries?

What can you say about young people’s attitudes toward farming?

I believe they are viewing it through the lens of traditional hoe and cutlass agriculture, which is erroneous. Agriculture will largely be influenced by ICT in the next ten years. Aerial drones are already in use in agriculture. The future of agriculture combines advanced information and communications technology with agricultural technology. This is where young people should try to find opportunities. Because of their overwhelming interest in ICT, any young person who enters the field now will benefit from the impending changes in the industry over the next five to 10 years.

How would you characterize the Nigerian government’s approach to agriculture?

I believe there were some efforts about ten years ago. There was a genuine effort under former Minister Akin Adeshina to transform Nigerian agriculture from a development-poverty-eradication perspective to one of business. I believe that the people who came after him did not consolidate that momentum and that we have lost that momentum. I think that a lot of work is needed to re-establish agriculture as a business.

If you want to do a business, show people that if they invest N100, they will receive N150 in six months. People are less likely to reinvest if there is no profit from an activity. If you address agriculture in Nigeria as a poverty alleviation scheme, people will see it as a development-oriented venture rather than a business.