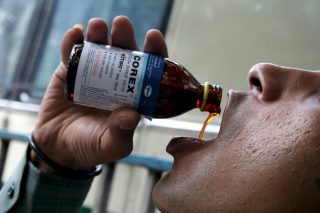 For years, the abuse of coughs mixtures, which are primarily meant for treating the sick, have always been written off as some kind of myth, something that wasn’t a problem or an addiction that could somehow be controlled. But sadly, this is not the case. According to a report compiled by the Nigerian government, three million bottles of codeine are consumed everyday in northern Nigeria alone.

In a recent investigative documentary on codeine abuse in Nigeria, Africa Eye and BBC Pidgin brings to light, the plague of addiction, which has eaten deep into Africa’s most populated nation.

Titled ‘Sweet Sweet Codeine,’ the documentary not only features the gruesome effects of the drug on millions of young men and women, it also reveals the illegitimate distribution and sale of the dangerously addictive sweet tasting opioid.

With access to Nigeria’s crack anti-drug squads, BBC pidgin journalist Ruona Meyer, whose brother has struggled with cough syrup addiction, journeys to unravel the secrets of the syrup plague, exposing the criminals behind it. In the exclusive undercover investigation, Africa Eye exposes senior figures in Nigeria’s pharmaceutical industry who are smuggling legally produced products out of their factories and into the hands of drug dealers who sell this to the final consumer without a care in the world.

Codeine syrup is sold in many heaving nightclubs of Lagos and on the ancient backstreets of Kano, not to mention the number of dealers scattered across the country, selling this drug at almost anytime of the day.

Many people don’t know this, but I was born and raised in northern Nigeria; Kaduna state to be precise. And growing up as a young adult, there were many whispers about codeine addictions gone bad. But this was often covered up with tales of how a classmate was transferred to another school in the middle of a session, or fell badly ill; tales of how aunts or uncles who were often left alone to take care of their younger ones were discovered to be under the influence of codeine. Lets just say people would more or less disappear for a while following a certain chain of events.

Now in those times, say about 10-12 years ago, there ought to have been some facilities founded by the government to help addicts, but most of these centres were set up by local people whose families, friends or other members of the community were struggling to help an addict within their circles. I would like to point out that many of these people weren’t necessarily trained professionals and as such would have to resort to physical abuse to get a lot of the addicts under control. I also imagine they weren’t equipped to properly manage these addicts, especially during the withdrawal period. Not to mention the infrastructure, medication and therapy to help them re integrate into the society.

Fast-forward to present day, and Nigeria is still not equipped to handle the rehabilitation of codeine addicts. Till date, not much effort is put into building better facilities, or seeking other means of funding and expertise to better deal with the problem.

The rehabilitation facility that is a central part of the African Eye documentary, puts a spotlight on some of the terrible conditions many recovering addicts are exposed to during the course of treatment. This needs to be properly addressed.

Also, a lot needs to be done to end the illegal movement and subsequent distribution of codeine around the country. Certain measures should be in place to ensure that security agencies are on alert, and well trained to ask the right questions immediately they notice anything suspicious.

The criminal network of dealers, which alarmingly comprises of some corrupt pharmaceuticals, is a clear indicator that moving to ban the sale of codeine cough syrup is not enough. Pharmaceutical companies in Nigeria need to be properly checked to ensure that they are adhering to the right principles, and ultimately helping to save lives. Drugs aren’t supposed to make you sicker. The Nigerian government needs to tackle this plague before it endangers the life of another Nigerian youth, and the time is now.

Africa Eye is a new documentary strand from the BBC, which is set to deliver up to 20 original and high-impact investigations from Across Africa every year.

“Africa Eye will promote the culture of investigative journalism across Africa and strengthen the skills of African investigative journalists. All of the programmes will be based on in-depth reporting that holds power to account. They will tackle topics that are of intense interest and concern to audiences in Africa,” said Nisha Kapur, Commissioning Editor for TV.

Kapur also added that these reports would be produced in a fresh and contemporary style that resonates with young audiences.