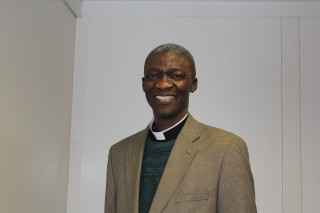 To increase its handful of minority ethnic clergy in senior leadership positions, the Church of England has appointed its first black bishop for 20 years. Downing Street announced that Woyin Karowei Dorgu is to be the 13th bishop of Woolwich, and will be consecrated at Southwark Cathedral on 17 March.

The only other black bishop in the Church of England is John Sentamu, now archbishop of York – second in the church hierarchy – who was consecrated as Bishop of Stepney 20 years ago. There are three BAME archdeacons and one dean.

Dorgu was born in Burutu, Nigeria and studied at the College of Medicine, the University of Lagos, graduating with Bachelor of Medicine, Bachelor of Surgery (MBBS) degrees.  Dorgu moved to the United Kingdom in 1987 and he studied theology at the London Bible College, an evangelical theological college in Northwood, London. He enrolled at Oak Hill College, a Conservative Evangelical theological college, to train for ordained ministry. Then he left after two years to be ordained in the Church of England, since his ordination, he has been a minister in London parishes.

Woolwich, in southeast London, has a significant Nigerian population, many of whom worship in black-majority Pentecostal churches rather than the C of E. Dorgu said one of his priorities as bishop would be to celebrate the racial diversity of the Woolwich area at a press conference at Southwark Cathedral. He said he intended to “encourage BAME [black and minority ethnic] vocations and more participation in ministry”.

“I will celebrate the diversity in race, ability, gender, sexuality and class … Celebrating our differences is a gift,” he added.

BAME representation among clergy and senior leadership has long been a concern in the church. Last year, the proportion of BAME people among those embarking on the process of becoming a priest fell to 1.9 percent, compared with a share of the general population of about 15%. In previous years it has been 4-5 percent.

The church established a committee for minority ethnic Anglican concerns more than 30 years ago, which recently stepped up efforts to improve BAME representation. An initiative called Turning Up the Volume was set up in 2012 with the aim of doubling the number of BAME clergy in senior positions within 10 years.

“Quite a lot of Nigerian Christians [in the Woolwich area] are from an Anglican background. I hope my appointment will be a model. Seeing someone from a similar background could be a catalyst for dialogue between the C of E and black majority churches and Nigerians looking for a spiritual home, said Dorgu.”

On the issue of sexuality, which has divided the Church of England and the global Anglican communion for two decades, Dorgu said he stood firmly behind the church’s official position. The church refuses to conduct same-sex church weddings on the traditional biblical grounds that marriage is between a man and a woman, and its insistence that gay clergy must be celibate.