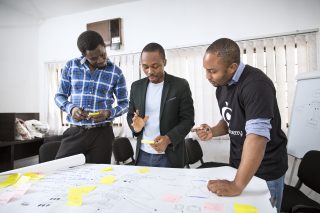 11-year old Oscar Ekponimo went several days without food when his father fell ill and consequently lost his job. His mother’s income as a nurse was not enough to cater to the family’s needs, and things got so bad that food became a luxury. “I recall one instance when all I ate in a 48-hour period was a biscuit snack a friend shared with me at school,” he said.

Those years of hunger and deprivation were tough on the 11-year-old. And though things improved after his father got another job, Ekponimo resolved to use the skills he had to find ways to prevent others from experiencing what he and his family had gone through. Now age 30, Ekponimo is doing exactly what he said he would; feeding families who cannot afford meals.

As a software engineer residing in the capital of Nigeria, Abuja, Ekponimo has developed a cloud-based software application named Chowberry. The application connects retailers to low-income consumers, charity organisations and food-relief agencies.

Chowberry allows retailers scan barcodes on food items and notifies them via the scanned bar codes when these food items are reaching their expiry date. That way, they are able to sell these items to low-income consumers on the cheap. “I saw an opportunity to provide affordable nutrition to millions of people while providing retailers with a sustainable system for managing the end of shelf-life. This is a win-win solution,” he said.

The pilot for Chowberry, which ran for three months last year, was largely successful with 300 users and 20 partner retailers within Lagos and Abuja, feeding about 150 orphans and children in need. But he still faces challenges of reaching the very poor and getting big companies on board. Therefore, he seeks partnerships with community organisations and food-relief agencies such as Save the Children Fund.

Last year, Ekponimo won the Rolex Award for Applied Technology. Early this year, he was named one of Times Next Generation Leaders. Currently, he is working hard towards developing Chowberry into a sustainable social enterprise so that he can realise his goal of feeding millions of hungry Nigerians who are depending on him.

“When I think of the millions of people who are food-deprived, counting on me to give them some relief, to help alleviate their suffering, I am driven to make Chowberry a success. I can never throw in the towel.”