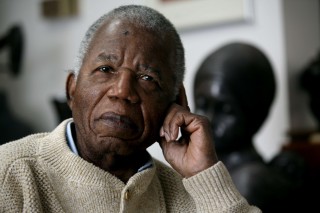 Chinua Achebe: On writing, simplicity and the Igbo culture

Chinua Achebe was a trailblazer. Through his novels, he told a tale of African history, not as inferior to western civilization, but as equal. Through his works, he spread the African Gospel to the world. You could see his pride for his Igbo roots permeate his books and he was never one to deny it, often giving literary readings in Igbo and English as he pleased.

Achebe’s Things Fall Apart was one of the first African novels I truly read. I first encountered it as a television drama in the 90’s, starring Pete Edochie as Okonkwo. As a child, I enjoyed it purely for the entertainment value and not much else. I never truly understood its impact, its significance, and its importance to African Literature until in my teenage years. When my brother who was schooling abroad returned, he brought it home along with his other literature books for the semester. I picked it up, and out of curiosity, I delved deeper into the novel. What unraveled before me was a story that was as sophisticated as any piece of literature but still had the simplicity of moonlight tales told by my parents to me at night.

In summary, Things Fall Apart is a novel about Okonkwo, a prized local wrestler in Umuofia, and his struggles adapting to a rapidly modernising Nigeria in the initial days of Colonialism. It tells a tale of his humble beginnings–from being the son of a failed man–to his rise to becoming a successful and influential man in his village, his subsequent fall, and suicide after westernisation had started taken root in the land.

As an Igbo native, Things Fall Apart introduced me to various parts of the Igbo culture; and not just the culture, but the mentality and thought process of a typical Igbo man. Okonkwo, as we see in the novel, was the living embodiment of how Igbo men think, act and behave, (which explains a lot, given the similarities between Okonkwo and my dad).

What amazed me most about the book was how well Achebe interwove the Igbo culture with the white man’s culture and the fictitious village of Umuofia. And I must say this novel had a telling impact on my development as a man.

Chinua Achebe was a storyteller extraordinaire; who knew how to weave simple grammar into an engaging fairy tale journey while infusing his proud Igbo heritage with his profound patriotism as a proud Nigerian. It amazes me how a man could use simple diction that anybody with a basic understanding of English could understand and yet layer the simplicity in many dimensions to create this complex wave of grammar. It is for this style of writing that I can say Things Fall Apart is a novel that could be read by people of all ages, backgrounds, education and demography, from pre-teen to elderly, from the uneducated to the well-educated.

I myself have tried in futility to mimic this simple-complex style of writing but often found myself losing the plot midway, often confusing myself.

This article is the second in our ‘Chinua Achebe: A Man of the People’ series. Ventures Africa is celebrating and honouring Chinua Achebe, one of Nigeria’s most influential and celebrated writers. His birthday is on November 16.