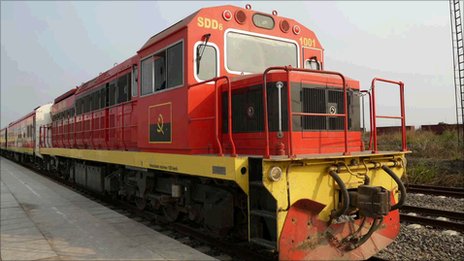 The Benguela railway line stretches for 1,304 km between Lobito (Benguela) and Luau (Moxico) in the East of Angola. The construction contract involved rebuilding of 67 stations and will allow a maximum train speed of 90 km per hour with capacity for 20 million tons of cargo per year

“The reconstruction work was based on the gauge used in China. The previous one was Portuguese and did not allow speeds of more than 30 km per hour,”said China Railway Construction director for the project Liu Feng.

He said this was Angola’s longest railway line and also the fastest.

The Angolan authorities estimate that the Benguela Railway Line will have around 50 trains running on it per day and will make it possible to transport four million passengers.

Portugal began construction of the line in 1899. The connection to Luau was finished in 1929 and in 1931 the port of Lobito received by rail the first cargo of copper from Katanga.