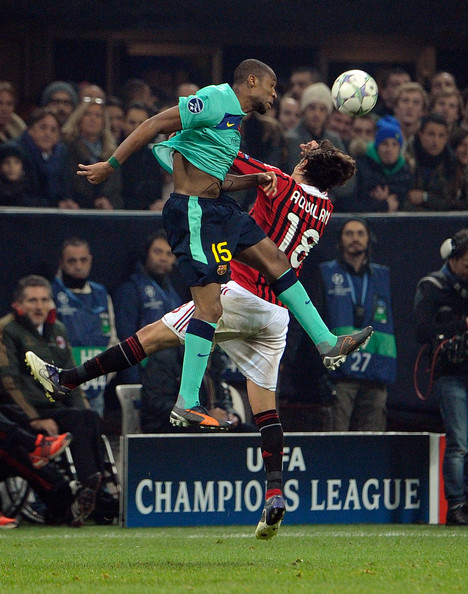 The quarterfinals of the prestigious UEFA Champions League took centre stage this week with several African stars helping their clubs reach the last 4. Here’s my take on the first leg action and what to expect when the second leg takes place next week.

This was unarguably the tie of the round with 11 Champions League crowns between the Italian and Spanish champions. More fascinating was the fact that both teams emerged from the same group with Barca claiming a pulsating 3 : 2 win at the San-Siro after the Rossoneri had scored a last minute goal to claim a 2 : 2 draw in the first game at Camp Nou.

Barcelona coach Pep Guardiola gave Malian international Seydou Keita a rare start ahead of Cesc Fabregas, obviously with the intention of keeping it tight. On the other side, Ghana’s Kevin Prince Boateng was in Massimo Allegri’s starting line up and didn’t disappoint with an energetic performance although he was subbed just past the hour mark.

While Barcelona lodged a formal complaint to UEFA about Milan’s terrible pitch, the Blaugrana did enjoy most of the possession (like they always do). However, Milan had more clearcut chances with Robinho and Ibrahimovic guilty of missing sitters.

The goalless draw therefore sets up a mouth watering clash at Camp Nou next week Tuesday as Milan know a score draw will be enough to see them through to the next round.

BENFICA 0 : 1 CHELSEA
The Boys from Stamford Bridge may be enduring a torrid time this season- fifth on the EPL table and 5 points off Champions League spot. But since the sack of Andre Villas Boas, there seems to be a newfound vigour in the team. Roberto Di Matteo (RDM)’s team expertly dispatched Napoli but Benfica was a different challenge all together.

RDM surprised many with his line up as veteran Didier Drogba, Michael Essien and Frank Lampard dropped to the bench. However, there were rare starts for Ivorien Salomon Kalou and his Nigerian counterpart Mikel Obi as Chelsea decided to soak up everything the Portuguese side threw at them. That tactics paid off as a brilliant solo effort by Fernando Toress was finished off by Kalou to give Roman Abrahmovic’s blue army a huge advantage. But caretaker boss RDM insists the job isn’t done yet. “I think we’ve put ourselves in a good position,” Di Matteo said. “But it’s not a result you can rely upon for the home game. ”
Benfica may have contributed to Manchester United’s elimination in the group stages, but beating Chelsea by at least a 2 : 1 margin to scale through, may just about too much of a mountain to climb.

Ghanaian international Andre Ayew has one very special wish: to replicate his father (Abedi Pele Ayew) ‘s 1993 European Cup win with Marseille. But after going down 2 : 0 at home to German giants Bayern, it seems that dream would have to wait another year.

With the finals of the tournament to be hosted in Bayern’s Allianz Arena, Juup Heynckes side are desperate to reach their second final in 3 years. And the Germans are course for a semi final meeting with Real Madrid except Andre and his brother Jordan can pull of an unlikely miracle in Germany. If you ask me, I don’t see that happening.

It was all historic when Apoel became the first Cyprus team to reach the last 8 of the tournament. But their dreams of continuing the fairytale may have been cut short even from the day the quarter-final draws were made. Upsetting 9 time champions Real Madrid was always going to be difficult and from the moment French striker Karim Benzema struck the opener, the result was always going to be predictable. Coach Jose Mourinho now has a healthy lead going into the return leg at home and will now focus his attention to the La-Liga race as Barcelona breathes down his team’s neck.