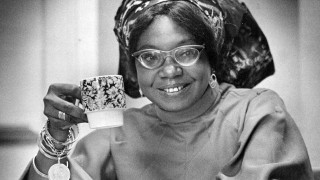 Everything about Flora Nwapa screamed ‘feminist’, everything but her own words

“I think that I will go out and say that I am a feminist with a big f because Obioma said on Monday that feminism is about possibilities; there are possibilities, there are choices. Let us not be afraid to say that we are feminists…. Globally, we need one another.” – Flora Nwapa

Eighty-six years ago today, Florence Nwanzuruahu Nkiru Nwapa, popularly known as Flora Nwapa, was born in Oguta, Imo state, Nigeria. Thirty-five years later, she published Efuru which, upon publication, made her the first female African writer to be published internationally in the English Language. Today, Google pays homage to her by making her the doodle on their homepage in celebration of what would have been her 86th birthday.

In July 2016, Yovanka Perdigao published an article titled ‘The reluctant feminist: Flora Nwapa’. In it, she made reference to Nwapa’s initial rejection of the label ‘feminist’ and her subsequent adoption of it many years later. At first, Nwapa rejected the label because, she, like many people still do, perceived feminism as anti-men. But despite her refusal to identify with the movement, feminism was a strong theme in Nwapa’s book, Efuru.

Efuru is an eponymous book about a young woman and is set in the Igbo rural community in Nigeria. The story’s protagonist, Efuru, is the daughter of Nwasike Ogene, a respected and celebrated man in the tribe. Efuru falls in love with a poor farmer, Adizua, and elopes with him because he doesn’t have the resources to meet traditional wedding requirements. As the story progresses, we see how Efuru supports her husband financially, rejecting the idea of helping him on the farm and deciding to be a trader instead. Her influence on her husband is strong enough to make him forsake his farming tools and join her in trading. Efuru and Adizua have a daughter but he soon abandons her, just as his own father did in the past. After Efuru loses her daughter to the cold hands of death, she finds out that Adizua has married another woman and had a child with her. Her in-laws try to convince her to remain in their marital home but she refuses and decides to go look for him. After failing to find him, she decides to go back to her father’s house. He receives her with joy because she can care for him better than anyone else. Later, Efuru meets an educated young man in her age group called Gilbert. They get married, this time following the traditions of the land. For a while, their marriage is a happy one, Gilbert and Efuru do business together as equal partners. However, things start to get bitter when Efuru is unable to conceive any children. Efuru is chosen by Uhamiri, the goddess of the lake, to become one of her worshippers; Uhamiri was known to offer her worshippers wealth and beauty, but very few children. Her second marriage eventually fails as her husband starts to treat her badly and favour his two other wives.

When Efuru was released, it received a lot of criticism, most of which was targeted at Nwapa’s “weak writing” and “inauthentic story.” Nevertheless, Efuru has over time become an icon of literature, inspiring many African women and granting Flora Nwapa the title of “mother of modern African literature.” Everything about Nwapa screamed ‘feminist’, everything but her own words.

In 1953, Flora Nwapa attended University College Ibadan. While there, she was president of the Queen’s Hall and met the Queen and Duke of Edinburgh during their visit to Nigeria. She kicked off her career as a Woman Education Officer in the Ministry of Education Calabar and then moved to become a teacher at Queen’s School, Enugu. She left there and headed to the University of Lagos where she started as an Administrative Assistant and rose to the position of Assistant Registrar in charge of Public Administration in 1966. In 1970, she became the first female Minister of Health and Social Welfare for Nigeria’s former East Central State. Later, she served as the Minister of Lands, Survey, and Urban Development until 1974.

At the start of her literary career, because of the way feminism was portrayed and the manner in which she perceived it, Nwapa wanted nothing to do with the label. She thought it was contentious and against men. Eventually, she embraced it. But her struggle with the label ‘feminism’ is representative of the current conversations about the movement in Africa. It is a movement often misunderstood, and quite frankly, understandably so because it has also struggled to define itself. There is no universal definition of feminism, a challenge brought about by the diversity of social realities. Every society is different because it experiences many different things in many different ways; the way women are perceived, represented and treated differs from one society to the other.

In reformist African feminism texts, Arndt says, “individual, patriarchally-molded attitudes, norms and conventions, both century-old and modern, which discriminate against women and hinder their self-realisation are censured. Consequently, the criticism is only partial, and is usually brought forward in a differentiated way.”

She explains that “Reformist African-feminist writers want to negotiate with the patriarchal society to gain new scope for women, but accept the fundamental patriarchal orientation of their society as a given fact. In these texts, alternatives to what is criticised are always discussed. It is assumed that the society is capable of reform; in keeping with this logic, the texts usually have a conciliatory ‘happy end’.” Men are criticised, not as a group, but as individuals, ignoring the existence of systems and structures already embedded within society to foster gender inequality.

Transformative feminist texts are quantitatively predominant in Africa, ergo, the transformative approach is more popular on the continent. In transformative texts, men are more sharply and complexly criticised. These texts depict that “men aren’t only accomplices, but also products of patriarchal patterns of thought.” Transformative texts more openly admit that patriarchy is deeply embedded in society.

Radical feminist texts “argue that men (as a social group) inevitably and, in principle, discriminate against and mistreat women.” These texts depict men as hopelessly sexist and deeply immoral by nature and posit that men characters who depart from this patriarchal pattern are rarely found, but even if they do, they are powerless.

Often times, on the internet, you will find feminists who argue with the transformative approach; on rare occasions, you will meet those who argue with the radical tone, sometimes veering into realms of man-hate. It is this ‘realm of man-hate’ and radicality that perhaps shaped Flora Nwapa’s prior idea of feminism, causing her to reject it and embrace a form of womanism instead. However, Nwapa’s shift in mentality came after she’d heard some of her fellow female African authors shed light on what positive feminism is.

“Years back, when I go on my tours to America and Europe, I’m usually asked, Are you a feminist?’ I deny that I am a feminist…. But they say, all your works, everything is about feminism. And I say, No, I am not a feminist.’ Buchi Emecheta is another one that said: I am a feminist with a small f (whatever Buchi means). Having heard Obioma on Monday, having heard Ama [Ata Aidoo] today, I think that I will go out and say that I am a feminist with a big f because Obioma said on Monday that feminism is about possibilities; there are possibilities, there are choices. Let us not be afraid to say that we are feminists…. Globally, we need one another,” Nwapa said during a conference before her death in 1993.

To her, feminism is about possibilities and choices, about giving women the right and freedom to choose their path without the menacing burden of societal limitations. Getting to that point where Nigeria is accepting of a woman’s right to choose is a long, rocky road, but is not a fool’s errand. It is possible.