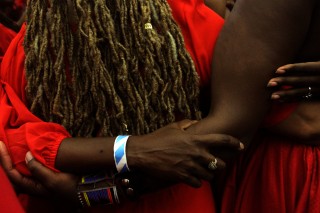 Celebrating the work of these extraordinary women in Africa

Can you imagine a world without women? No make-up, no children running around, no cat fights, no fashion houses, no beauty pageants and an end to television soapies. The world would be colourless and life would cease to exist. The earth would literally go back to the dark ages as the lights switch off and the last human takes his last breath. Imagine, an end to humanity. We see it all the time on apocalyptic movies but imagine this becoming reality.

It then goes without saying that this really is ‘A Women’s World’ and humanity ultimately cannot survive without them.

So with all their “nagging” and eccentricities, women bring our planet to life.  Yes, there are some women who spend all their time in shopping malls, wake up at dawn to go and hit a tee-shot on the golf course, or simply spend their hours playing desperate housewives.

But then there are those who prefer comforting and nourishing the poorest of the poor and lending a hand to help develop a world where poverty, hunger and unemployment are exterminated. So deeply involved are these women, that they exhaust each waking hour in communities where water, electricity and food are rare commodities. This is Africa.

Today, we salute the work of some of our extraordinary women in commemoration of International Women’s Day 2018 on 8 March which is themed: “Time is Now: Rural and urban activists transforming women’s lives.” 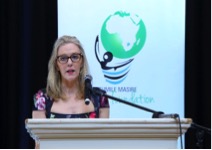 Michelle’s work speaks for itself. She wants to see Africa become a food-secure continent to curb conflict and malnutrition. This 51-year-old has worked tirelessly in Africa since 2010, focusing on creating employment, innovating new approaches to food security and supporting disadvantaged children.

This New York-born yoga addict advocates for programs that provide early childhood education programs and safe places for children to be after school.

“Food security is a major global concern, the consequences of which are most acutely felt in Africa and other emerging markets. I believe that technology-led, sustainable agriculture is a critical growth sector for Africa’s transformation,” she says.

“We are focused on changing the performance and perception of this sector to make it an attractive option for Africa’s biggest potential asset: the youth,” she said. 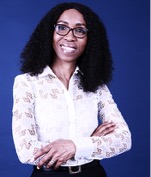 Born in a rural village in Umzimkulu, Dr Gwagwa inspires all those around her. She confidently entered the male-dominated field of town planning and surpassed all expectations by qualifying at the age of 21. She has been “viciously” practicing in the field for over 30 years. During her tenure at the Department of Public Works from 1995 to 1998, she was instrumental in policy development for transformation in the construction industry. This versatile woman is also an accomplished business leader and philanthropist, with spatial equity being the driving force behind her philanthropic work. Dr Gwagwa founded the Mhakazi Trust about 20-years-ago to empower young people, many of whom have since graduated from tertiary institutions.

Four times a year, she hosts a ‘Girls Lunch’ where she engages young African women on issues facing women in modern society.  She motivates them to dream big.

“Read widely. Travelling broadens your mind, and it is not as expensive as we think. Build and sustain your networks. Get involved in your community, and in empowering others. But most importantly, invest in knowing yourself,” she says.

This keen photographer believes that education is the mechanism to pull the poor out of poverty.

This resourceful woman’s passion is to change the African narrative by providing a platform to give youth a voice to boost entrepreneurship. Malian Fayelle Ouane, 35, was born in Geneva and graduated from Harvard’s Business School with an MBA. She believes young entrepreneurs deserve a seat at the economic table.

Fayelle is the co-founder of Suguba, a platform that fosters regional integration to develop robust entrepreneurial ecosystems in West Africa. From a young age, thanks to her frequent trips to Mali, Fayelle became convinced that she needed to take advantage of her privilege in order to create better conditions for Africans. In Mali, the youth unemployment rate stands at an alarming 35%.

“Having such a large proportion of youth idle in countries that have the population pyramid of a typical African country can be likened to having a car with a gas tank that is leaking”, she says.

In the next decade, Fayelle hopes to see an Africa being valued for what it can teach the rest of the world instead of being referred to as a “charity case”.

“I would encourage the youth to not wait to be given opportunities but rather to demand them and help create them themselves,” she said.

This brilliant mind is constantly burning the midnight oil to entrench her roots deep in African soil. Mimi is determined to empower women and skill youth so that Africans have a voice on the continent’s narrative. She believes Africa should be part of the conversation that shapes the world. Mimi is an accomplished author and co-founder of Africommunications Group (ACG), a pan-African public relations firm that aims to give the poor of Africa a voice. She takes ideas, viewpoints and strategies and makes them understandable to the diverse groups in Africa so that people may participate and engage in discussions affecting the world.

The release of her latest e-book “Talking To Africa: Considering Culture in Communications for a Complex Continent” is about communicating in the four major African countries of South Africa, Kenya, Nigeria and Ethiopia. She speaks about understanding the cultural dynamics in order to be successful with communication strategies to reach tangible objectives like development.

This New York University graduate is also the Director of Communications for the African Institute for Mathematical Sciences (AIMS), a network of centres of excellence incubating STEM education for Africa’s brightest students while searching for the next Einstein in Africa.

Her love for Africa has allowed her to form part of 2017 Archbishop Tutu Fellow Leadership programme. She also sits on the Africa Brand Counsel and was nominated for the Women4Africa Awards 2016 and was a finalist for the International African Woman of the Year Award. 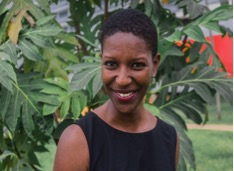 Eloïne Barry is a versatile lady who has dedicated her career to the continent.  The 37-year-old and her team work on public health campaigns like Malaria, Ebola and vaccinations and use the media to implement much-needed changes in Africa. Eloïne empowers African journalists by providing them content and guiding them through the challenges facing Africa.

Born in lyon, France to Senegalese and Guinean parents, Eloïne believes the media has the power to disseminate messages effectively to rest of the world to get the much-needed help an make the changes we want to see in Africa.

“We believe they are the right actors who can change the world,” she said.

This avid reader, yoga enthusiast and traveller believes African youth should not seek opportunities outside Africa.

“Stay in your country, stop seeking greener pastures abroad as you have everything right in front of your eyes. The African continent is the future, it is vibrant, it is varied, it offers so many opportunities, that you will not find anywhere else”

The island of Mauritius, surrounded by white sandy beaches and lagoons, is where little Salma was born. This sassy girl grew to become an extraordinary figure in Africa through investment and sheer determination. In the Democratic Republic of Congo, she hopes to grow fibre optics to reach the poorest of the poor through education and health access. With her team, she is currently connecting universities with high speed internet so that Africa’s students are not left behind. She wants them to have the same digital opportunities as their western counterparts.  In Zimbabwe, Salma is involved in the running of gold mines which are the basis of communities and has created employment in a country where jobs are extremely hard to come by, with some estimating that Zimbabwe’s unemployment rate could possibly be between 90 and 95 percent.

Salma is the executive director at Gold and General Limited that focuses on mining and infrastructure projects in Africa. Salma graduated with a Masters in Law/Business from the University of Toulouse, France, and holds an executive MBA from Cass Business School in London.

This extraordinary woman, who turned 40 last month believes in treating Africa as a purchasing power and has been working since 2007 to make this a reality. Her advice to the youth of Africa is to become go-getters.

“Be entrepreneurs – we are not burdened with incumbent infrastructure and we can jump ahead in terms of economic development – with new technology and internet access – look at businesses in China, Europe and tailor them to Africa,” she said.