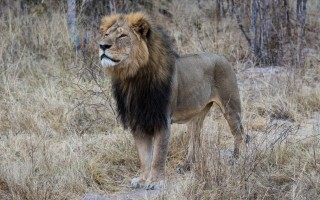 First, there’s the callous murder of one of Africa’s most iconic animals.

13 year old Cecil was one of the oldest and most famous lions in Zimbabwe. Arguably the largest and most beautiful lion in the Hwange National Park. He had six cubs and was collared as part of an Oxford University programme. Basically, he was one animal that needed to remain alive. But American hunter Walter James Palmer killed him, before proceeding to skin and behead him for trophies. Cecil was known to be non-violent and was never aggressive to those who didn’t interfere with him or his prey. “Approaching him closely was never difficult, a daily occurrence for him and something he paid no attention to,” wrote Vince O’Sullivan, whose photograph is used in this article.

By killing Cecil, Palmer may have actually ignited a killing spree that could leave six more lions dead. As explained by Heavy.com, Cecil’s six cubs could likely be killed by another lion, since he is no longer there to protect them. “The saddest part of all is that now that Cecil is dead, the next lion in the hierarchy, Jericho, will most likely kill all Cecil’s cubs so that he can insert his own bloodline into the females,” it quoted the  Zimbabwe Conservation Task Force as saying. With around 600 lions killed yearly for trophy, hunters and those granting them the permit to hunt are in fact aiding the extinction of African lions.

Palmer claims that he had the permit to hunt, “I had no idea that the lion I took was a known, local favourite, was collared and part of a study until the end of the hunt,” he said in a statement on Tuesday. “I relied on the expertise of my local professional guides to ensure a legal hunt.” However, authorities say Palmer’s permit didn’t cover killing Cecil. “Investigations show the killing of Cecil was illegal because the land owner was not allocated a lion on his hunting quota for 2015,” Zimbabwe Parks and Wildlife Management Authority (ZPWMA) and ZCTF said in a statement. Even if he illegally killed Cecil, Palmer will not be held accountable for his crime, the blame instead would pass on to his two professional guides. They would still not be so bothered; the maximum that they can be fined is $20,000, less than half the $50,000 that they were paid by the hunter.

Then there’s the flawed logic of trophy hunting.

Zimbabwe and other Southern African countries issue permits that allow foreign hunters to kill endangered animals like the elephant, buffalo and lion, with the argument that it brings in funds for conservation efforts. While the permits do raise some money, it raises more controversy and sends a message that is averse to the goal of conservation. In May an American paid $350,000 for a Namibian permit to kill a black rhinoceros. The country’s Ministry of Environment and Tourism said the Rhino was old and detrimental to the herd and that the money would be used for conservation efforts. The stated “good intentions” did not make the act any less condemnable or more justifiable, and these comment on its story in the Huffington Post explains just why.

While the first comment carries an unproven allegation of impropriety of the Namibian authorities, it is more of a product of the fact that much of the trophy hunting ‘payment’ for conservation in Africa has often not found its way there. This point is buttressed in a 2014 opinion piece by Jeff Flocken of the International Fund for Animal Welfare, in which he writes that “despite the wild claims that trophy hunting brings millions of dollars in revenue to local people in otherwise poor communities, there is no proof of this. Even pro-hunting organizations like the International Council for Game and Wildlife Conservation have reported that only 3 percent of revenue from trophy hunting ever makes it to the communities affected by hunting. The rest goes to national governments or foreign-based outfitters.”

In fact, as Jeff Flocken further states, the revenue from hunting permits pales in comparison with the money generated from park visits. He adds that “if lions and other animals continue to disappear from Africa, this vital source of income—nonconsumptive tourism—will end, adversely impacting people all over Africa.” Thus, trophy hunting is not just an ineffective source of revenue for conservation, it is actually a killer of the industry. Activists in the US, where 60 percent of the trophy from the hunts go, are pressuring the American government to ban hunters from bringing trophies back home, in the same manner African activists must push governments to cease the issuance of hunting permits. Animal conservation is after all about keeping them alive, not killing them.