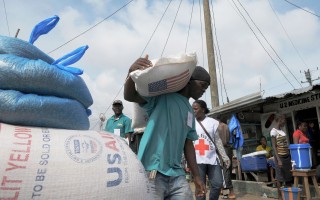 Nearly 30,000 people have been left without homes in the Central African Republic (C.A.R) after days of heavy rains, severe flooding and rising levels at the Oubangi River in the southwest of the capital, Bangui.

The government on Sunday put the figure of displaced persons at over 28,000 across the provinces and in the capital city. And there are concerns more homes are likely to fall, leaving thousands more homeless.

Makeshift camps have been set up for residents affected by the floods in Bangui. “Really, we need assistance. Some homes were destroyed, families are outside their homes,” said Rock Lionnel Koigningbo, a coordinator for one of the camps.

But considering the scale of the disaster and the difficult situation the central African nation finds itself in, Prime Minister Firmin Ngrebada this week declared a ‘national catastrophe’ as he appealed for international support.

“I with the authority of the President of the Republic and Head of State, accordingly declare a national catastrophe and we are appealing for national and international solidarity,” Ngrebada said.

While the government appeals for resources and emergency relief to assist thousands of affected people, disasters like these highlight the need to have in place sustainable solutions for confronting climate and natural disaster risks.

Over time, several African nations have been affected by climate and natural disasters such as droughts, floods, tropical cyclones, storms, and epidemics. These have had devastating impacts on populations and their livelihoods.

As seen in the past few years, such incidents are increasing in both frequency and magnitude. A recent sample is a cyclone that hit Mozambique, Malawi, and Zimbabwe in March, killing over 1,000 people and affecting a combined three million people.

Disasters come with implications on economic growth too. From 1998 to 2017, disaster-hit countries reported direct economic losses of $2.9 trillion and climate-related disasters accounted for $2.2 trillion of the total amount, according to the United Nations (UN).

With much of African economies built around industries that are largely prone to climate-related disasters – mining, agriculture, forestry, tourism, wildlife, and services – the region suffers major financial losses.

When it comes to responding to these disasters, Africa has always struggled. This is because it is forced to allocate a portion of its limited resources to disaster preparedness along with several competing priorities in health, education, infrastructure, and other sectors.

As a result, a huge chunk of funds and interventions during disasters come from donors through humanitarian appeals with the help of the international community. While affected people are forced to make difficult decisions that deteriorate their livelihoods.

Changing this narrative requires that African leaders come up with better disaster risk management systems on the continent based on strong preparedness and response mechanisms to match the changing nature of risks.

The establishment of the African Risk Capacity (ARC) by the African Union Heads of State in 2012 was geared towards that goal. The agency’s operation is based on three critical elements of disaster risk management – early warning systems, response planning based on contingency plans, and an index-based insurance and risk pooling mechanism.

Since its founding, 32 policies have been signed by ARC partner states with $73 million paid in premiums for cumulative insurance coverage of $553 million. The premiums have been deployed for the protection of 55 million vulnerable populations in participating countries.

But in the ARC’s years of operation, during which it has been unable to cover every vulnerable nation due to resource gap, an important lesson has emerged, writes Mohamed Beavogui, the Director-General of ARC and UN Assistant Secretary-General.

According to Beavogui, the resource gap needed to protect vulnerable populations against disasters can be reduced substantially through a combination of efforts and collaboration between governments, international aid, and the private sector.

“To build sustainable and country-driven responses, aid resources should support government budgets in financing innovative mechanisms, such as risk transfer, and leverage resources from the private sector through, for example, insurance and bonds,” the ARC DG said.