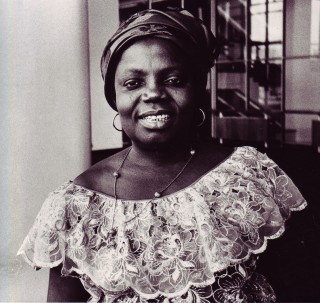 I was in SS2 when I first read Buchi Emecheta’s The Joys of Motherhood. Like most of my classmates, I was only concerned about doing well in the Literature tests and exams. All that talk about Nnu Ego and motherhood meant very little to me and so I didn’t understand most of what I was reading. Or maybe I understood but the weight of the subject matter hadn’t dawned on me yet. Many years later, it has become impossible for me to ignore the burden and pain that women go through every day – now when I read The Joys of Motherhood, it is enough to weigh me down. Emecheta did not pluck Nnu Ego’s story of suffering, sorrow and eventual loneliness out of thin air; it is a complex and authentic illustration of what many mothers in Nigeria and Africa go through every day.

On Wednesday, January 25, Buchi Emecheta, author of some of the most riveting books of African literature, passed on in her sleep in London. Emecheta wrote more than 20 novels and plays in her lifetime, covering topics ranging from motherhood to the independence and freedom of women through education. In 1974, she published one of her most critically acclaimed novels, Second-Class Citizen. It tells the story of a woman named Adah Ofili, and, like many of Emecheta’s books, it was a fictionalised autobiography.

As a girl, Adah, the main character, spends her days at home with her mother while her father is away at work. Adah’s brother goes to school but she isn’t allowed to because she is a girl, even though she is determined to. One day, she sneaks out of the house while her mother is distracted, and bursts into a classroom during an ongoing lecture. Even though she disrupts the class, the teacher, whom she had already met a couple of times, lets her stay in school for the rest of the day.

A few years later, Adah’s father dies. After his death, she marries a man called Francis and does her best to support him. Francis travels to the United Kingdom alone at first but eventually, Adah and her children join him. While there, she works hard to pay for his education while also taking care of their children. As the story develops, Francis transforms into an abusive husband who has become too lazy to work. To him, they (his family) are second-class citizens in the UK.
Adah, however, is determined to succeed against the odds. She strives to become first-rate in the UK while thriving as a pillar for her children in spite of Francis’ lack of support.

Second-Class Citizen depicts several aspects of Emecheta’s life. Like Adah, she was not allowed to go to school; instead, her younger brother was favoured over her. However, she eventually persuaded her parents to let her go to school, after convincing them of the benefits of her education (the more educated a woman, the higher her bride price). Emecheta first attended an all-girl missionary school. But a year after her father was killed as a soldier in the British army in Burma, she was sent to a Methodist Girls’ High School in Lagos with a full scholarship. In 1960, when she was 16, she married Sylvester Onwordi, whom she had been engaged to since she was 11. By the time Emecheta was 22, she had given birth to 5 children and her marriage had turned bitter, with Sylvester constantly abusing her.

At that age of 22, she walked away from the abusive marriage and set out on her own, with her 5 children. In the years that followed, Buchi Emecheta earned a BSc degree in sociology from the University of London, published 19 novels, 2 plays, 1 autobiography and had several articles featured in reputable publications. In 2005, she was bestowed with the Most Excellent Order of the British Empire (OBE).

There’s a lot Buchi Emecheta’s life and success can teach us. One of such is that it is possible for a woman to succeed without a husband by her side. There are many other successful women whose lives can attest to that fact. Marriage is not the measure of the success of a woman. No woman should be forced to stay in a marriage that is gradually and constantly eating away her soul. She can be independent if she so chooses and she is not an inferior being to a man. A woman is not a second-class citizen that cannot survive without the support of a man.

Emecheta was influenced by Flora Nwapa, and she (Emecheta) in turn inspired writers like Chimamanda Adichie, Lola Shoneyin, and Nnedi Okafor. Africa’s literary mainstage is no longer male-dominated and all evidence points to the fact that it will yet be mounted by many more women in the near future.

Perhaps Emecheta’s grandest legacy was making us realise that feminism isn’t alien to Africa. She clearly defined African feminism as one that is different from that of the West. “African feminism is free of the shackles of Western romantic illusions and tends to be much more pragmatic,” she once said. “Working and achieving to great heights is nothing new to the woman of Africa… An African woman has always been a woman who achieves.” This definition of feminism recurs in her books; it is evident in the lives of Nnu Ego and Adah Ofili. Through Emecheta’s works, we are challenged to think about gender inequality from within (and by ourselves as Africans) and not swallow the West’s idea of it, for every society is different in its own way.

So when we fight for the right for women to be considered equal to men, we are not punching above our weight. No! We are simply asking society to open its eyes to see that gender equality is not a fruit hanging from the tree in the middle of the garden. It is not forbidden. Emecheta’s work and life are a testament to this.