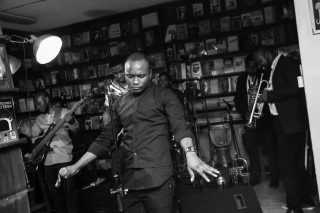 You would be doing yourself a huge disservice if you listen to Brymo’s music just for the melody alone. Frankly, I doubt anyone does that, but if they did, they’d quickly find out that there’s so much more to his music than his melody. His lyrics and delivery carry more weight, and this does not in anyway diminish his sound. Brymo always has something to say, on social media, in interviews, and on his albums.

On his album, ‘Merchants, Dealers & Slaves’, he proved himself to be as capable a vocalist as he is a storyteller, regaling us with tales of his grandfather’s love for wine and women, and philosophising about money, Lagos and a purple jar. The albums that followed were no less lyrically heavy and uniquely-sounding as MD&S was.

Brymo has always known how to balance his tune and his message. Listen to him and you will notice that his albums are designed so that the instrumentals never drown his voice, his message, for therein lies the potency of his music. With ‘OṢÓ’, his sixth studio album, Brymo delivers a sweet, soothing album peppered with tasteful songwriting and served in an easily consumable amount. Like good food, however, it will take some time to digest.

‘OṢÓ’ is 11 tracks and 38 minutes long, perfectly timed for a digitally-native generation, a generation of people with the attention-span of a goldfish, where very few people can sit through an album longer than 14 or 15 songs. Anything over that and you’re likely shooting yourself in the foot. Only playlists, usually because of their variety, are allowed to be that long.

I notice that on Apple Music, ‘OṢÓ’ is appropriately classified as alternative folk, a welcome variation from the generic ‘World’ under which Nigerian albums are usually categorised regardless of their genre.

Brymo opens OṢÓ with ‘No Be Me’, a song that reminds you of your humanity and your subjection to your environment over soothing strings and snares. It speaks to the common man struggling to keep up with the rising cost of goods and the young unmarried woman worried that time is leaving her behind. It speaks to the governor getting rich at the expense of his constituents and the politician who says he knows the truth but insists that nobody wants to hear it, so he “take power take bulletproof, buy properties overseas.” ‘No Be Me’ bows out to the glorious sonority of the saxophone.

In ‘Mama’, Brymo questions his ability to go any further than he has, bemoaning how nothing has changed in the world since his mother birthed him and how unfair life is. ‘Heya!’ is a nod to the complexity and the multiplicity of human experiences. ‘Patience and Goodluck’ sounds a lot like a song your grandmother would sing to you under the tree at twilight, with stars dotting the black sky and moonlight washing over your face while the cool evening breeze graces your arms and legs. “Patience and good luck, dem dey close, like hair and skin,” Brymo says, “…If you try, you go soon find am say, good times go come around again.”

In ‘God is in your Mind’, Brymo says he is at his finest as a songwriter, and it is not hard to see why. The song sounds like a New Age sermon on enlightenment and the presence of God in you. “For the first time, God shall be without a face,” Brymo sings over well-coordinated guitar strings and mellow drums, urging you to look inward and appreciate yourself. “Don’t be scared to get lost and be found. You’re that someone you think you’re looking for,” he adds.

‘Time is so Kind’ transports you to a live music bar where the rich and the powerful congregate on late nights. You’re there, seating with your partner and taking in the soothing sound, swaying from side to side and tapping your feet under the table. Brymo renders his vocals over a plethora of jazz instruments, philosophising about time and life, urging you to feel exactly what he feels about them.

On ‘Olanrewaju’, my favourite song off the album, talking drums invite you to dance bàtá, a prominent Yoruba dance. The same goes for ‘Olumo’ and on ‘Ba’nuso’, it is the bata drum that does the invitation.

‘OṢÓ’ is prominently feature-less, but this does no harm to the quality of the work Brymo has produced. His philosophy is moving – we are creatures subject to time and chance, and despite our complexity, we are beautiful all the same. The instrumentation is classy and expansive. You can clearly hear the guitars, a variety of drums, organs that remind you of spiritual things, and solemn piano chords. You can’t help but appreciate the richness of his sound.

Brymo is a skilled musician who understands his art. The songwriting, as we have come to expect from him, is brilliant. This is an album Brymo can be proud of and one I hope eventually grows into a classic. Because that is no less than it deserves.