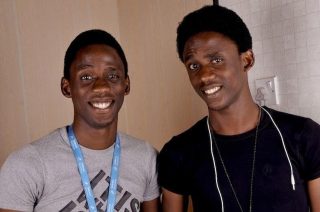 Brothers, Chidi and Chika Nwaogu, founders of Publiseer, are on a mission to take over Africa’s digital publishing space

“Venturing into the digital publishing sector means adopting a challenging lifestyle. You have to be open-minded. You have to be willing to take constructive criticisms and build a better business model around it.” – Chidi Nwaogu, CEO Publiseer.

Twin brothers, Chidi and Chika Nwaogu, are mostly driven by one thing – problem-solving. It is what gives them the most satisfaction in being entrepreneurs; the ability to create something extraordinary out of nothing and having that thing change people’s lives for the better. Their thirst for problem-solving has led them on a path of serial entrepreneurship, creating innovative businesses and subsequently selling them off.

The Nwaogu’s latest venture is Publiseer, a platform that allows independent African writers and musicians to publish, protect, promote and monetize their creative works on more than 400 partner stores in 100 countries, at no charge, with a single click. “Many budding authors and musicians in Africa cannot afford to publish, promote, monetize and protect their works, thus leaving their works and talents undiscovered. Some often have their works stolen or plagiarized without a due settlement,” says Chidi Nwaogu. Publiseer solves this problem.

The brothers conceived the idea for the platform a few years ago when they could not find a publisher and record label for a book and song they each created. “We couldn’t find anyone who didn’t demand money to publish my book and promote Chika’s song,” Chidi says. “Eventually, we self-published and promoted our works and it was a success. I was able to get my book across hundreds of platforms, generating revenue, and Chika was able to get his song across hundreds of music streaming websites.”

Following that incident, the brothers thought to start a publishing company for struggling writers and musicians to get their works seen by the rest of the world. They got to work and launched Publiseer on August 4, 2017, with Chidi as the CEO and Chika as the CTO.

Before Publiseer, independent African writers and music artists were forced to publish and promote their works on Western platforms like CDBaby and BookBaby. The publishing fee of these platforms can be costly considering that they have to be paid in dollars. This leaves African creatives with little or no money to promote their works. But with Publiseer, creatives publish at no cost with a bonus service of having their works edited or remastered before they are published.

“We want to maintain an excellent standard as we continue to promote the amazing creativity and beautiful heritage of the African people to the world through written words (books) and spoken words (music). In return, we share in the revenue generated from the sales of their works,” Chidi explains. Publiseer gets 25 percent of the revenue generated from the sales of a unit of any work; book, audiobook, song, or music video.

In the first quarter of 2018, the platform recorded a profit of nearly $11,000 having published and monetized the creative works of over 500 African creatives, including the works of well-known Nigerian music artists like Erigga, CDQ and Klever Jay. Publiseer’s partner stores include Amazon, Google Play, Apple store, Barnes & Noble, Spotify and Deezer. Creatives published on Publiseer can monitor the performance of their works across all partner stores using the platforms centralised dashboard.

Late last year, the platform was inducted into the International Publishing Distribution Association(IPDA), making it the first and only African publisher to be inducted into this organization. According to Chidi, the induction has given Publiseer quite the international exposure and helped foster a partnership with fellow IPDA member StreetLib. Through the IPDA, Publiseer has gained an invitation to the 2019 Geneva Book Fair scheduled for May.

The brothers hope to further leverage this membership with the IPDA at the 5th International Digital Distributors Meeting also taking place in May, to network and create strategic partnerships with fellow IPDA member companies and other publishers that will be in attendance. “This will strengthen our presence in Africa and promote our coverage in Europe,” Chidi says.

In spite of these milestones, the platform faces several challenges like piracy and copyright infringement, which Chidi describes as a menace to businesses in the creative field. “Some creatives plagiarize and submit the works of other people as their own. To mitigate this, we always verify the originality of any work submitted for publishing,” says Chidi. He also adds that implementing laws against intellectual theft and copyright infringement will make businesses in the field of content distribution and monetization more profitable.

They are also working on launching Publiseer for Music Videos, which will publish and monetize music videos of African music artists on video hosting services like VEVO, Tidal, Apple iTunes, and Amazon Video, for no charge. “In the next five years, I see Publiseer being the number one go-to publishing utility in Africa. And judging from the increasing rate at which people from the UK, Canada, the United States, and Sweden have been submitting their works to Publiseer, who knows? Publiseer could be a global phenomenon,” Chidi says.